Meanwhile, LVP took to Twitter to share that she didn't watch season 9 finale which aired on Tuesday, though she still had a way to slam the episode and the ladies.

AceShowbiz - It seems like Lisa Vanderpump's relationship with her "The Real Housewives of Beverly Hills" co-stars is beyond repair. The ladies are calling the 58-year-old restaurateur throughout season 9, but a new report suggests that they don't feel guilty about it.

"None of the RHOBH cast feel guilty for anything they said about Lisa at all this season," a source close to the production spills to HollywoodLife.com. If anything, it's said that "they feel they all spoke their truth and that Lisa should apologize to them."

The fall-out between them and Lisa started after they suspected Lisa of allegedly leaking a story about the PuppyGate scandal to Radar Online. They believed that Lisa did it in order to make her look good by acting like she didn't want people to come at Dorit Kemsley after it was revealed that she gave away a puppy that she got from Lisa's Vanderpump Dogs. Additionally, the ladies are mad after Lisa denied in a friendship-ending conversation with Kyle Richards.

Although Lisa vehemently denied the allegations, the other ladies allegedly "still feel like [Lisa] lied." However, the source notes that they are willing to bury the hatchet only if Lisa apologizes. "But honestly, to this day, if she said sorry, they'd forgive her and move on," the insider says.

The source claims that the ladies are not hung up over the PuppyGate drama. "A lot of them are over the entire situation by now anyways, but not the fact that Lisa won't apologize ever," the source explains. Despite the rocky relationship, the other cast members reportedly are feeling sorry for her recent loss following the death of her mom Jean. "They are all human, so of course they feel bad for what she's going through with the death of her mom, but they all feel that doesn't give her a free pass on anything," says the source.

Meanwhile, Lisa recently took to Twitter to share that she didn't watch season 9 finale, though she still had a way to slam the episode and the ladies. "I didn’t watch obviously,but the army at my house looking after my furry people did, and I heard from all of you about the nastiness once again," Lisa wrote on Wednesday, July 10.

"I am in London for my mother's funeral, I hope that after this awful year I can start life again," she continued writing alongside a photo of her and husband Ken Todd. "#RHOBH #9yrs Love Lisa Ken & Giggy." 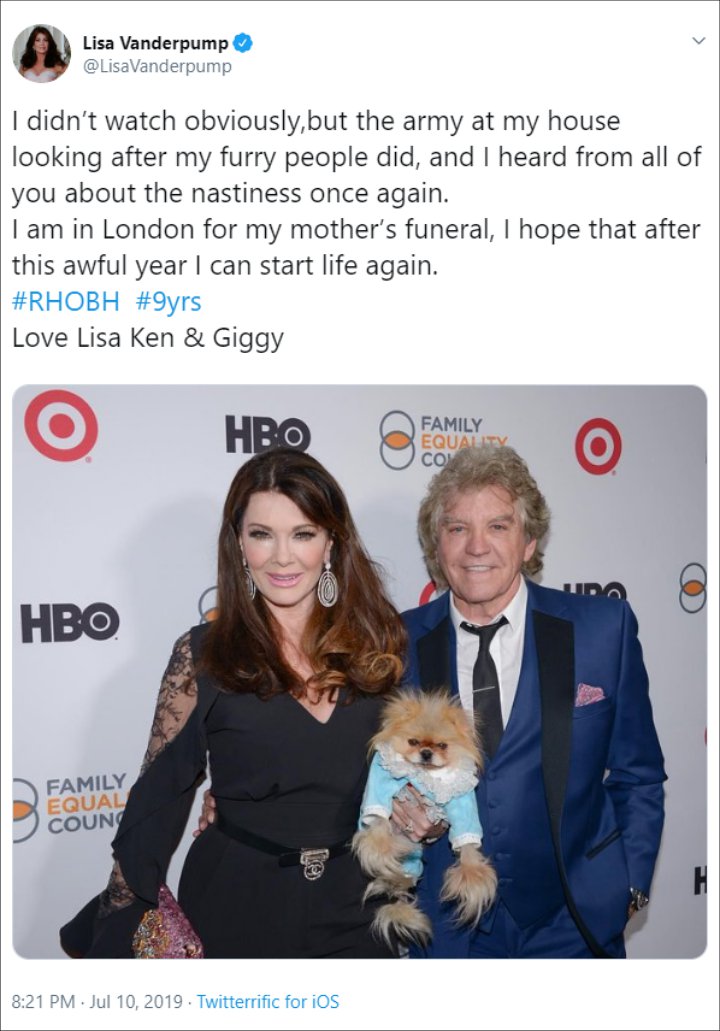 Lisa Vanderpump shaded the show in her recent tweet.

"The Real Housewives of Beverly Hills" will return for three-part reunion which will kick off on July 16 at 9 P.M. ET on Bravo.

Brandi Glanville Confirms Her Return to 'RHOBH': 'It's Not Gonna be PC'