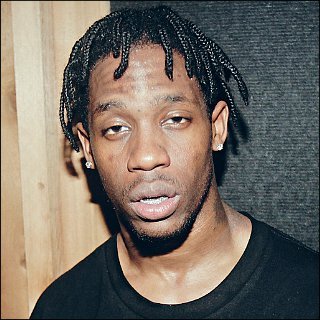 %cTravis Scott (II)% was born Jacques Webster on April 30, 1992. He grew up in Missouri City, a suburban area outside Houston and attended Elkins High School. Normally, Scott would stay with his grandmother, while his mother worked for the company Apple and his father ran his own business. Scott attended the University of Texas at Austin as well as The University of Texas at San Antonio before dropping out.

He got interested in music after watching the late '90s rap videos from %cMase% and %P. Diddy%. Scott began making beats when he was just 17. Along with his longtime friend %cChris Holloway%, he released an EP on MySpace in 2009. In the following year, he formed a duo called %cThe Classmates% with %cOG Chess% and dropped two full-lengths in 2011. All songs from both projects were produced by Scott himself. The duo broke up later in 2011 due to personal differences and financial disputes.

Following the split, Scott moved to Los Angeles from Texas. With the help of his friend Mike Waxx, who owns the website Illroots, he started to record and release music. %cT.I.% listened to one of Scott's songs titled "Lights (Love Sick)", which he released while staying in Los Angeles. Tip later contacted Scott, asking him to come down to a studio. T.I. then freestyled a verse for Scott's song "Animal".

Scott also drew %cKanye West%'s interest. In between working with the two rap superstars, Scott readied his "Owl Pharaoh" EP in 2012. Due to numerous issues, the mixtape was delayed until 2013. Scott then spent the rest of the year and until early 2015 playing live shows, dropping new songs and being featured on other artists' works. His debut album "Rodeo" was finally out in September 2015 and reached No. 1 on Billboard's rap albums chart.

In the following year, Travis announced his second album entitled "Birds in the Trap Sing McKnight" and confirmed that his third album would be called "Astroworld". The first single off his sophomore album, "Pick Up the Phone" featuring %cYoung Thug% and %cQuavo%, was released on June 3. It peaked at No. 43 on Billboard’s Hot 100 and was certified double platinum.

After revealing that he had finished working on "Birds in the Trap Sing McKnight" in late August, the rapper premiered the effort in the third episode of his radio show on September 2. The set debuted at No. 1 on Billboard 200, marking his first time topping the chart. Travis showed no signs of slowing down as he then teamed up with %cKanye West% to executive produce the latter's compilation album "Cruel Winter", a follow-up to "Cruel Summer".

Travis later embarked on a North American tour called "Birds Eye View" in support of his sophomore album. It kicked off on March 10, 2017 in New Orleans and concluded on June 2 in Eugene. Due to the success of the tour, he later announced that he would be traveling Europe too for the tour. The European leg of the trek launched on June 23 in Paris, France and ended on July 9 in Turku, Finland.

His personal life was put on massive spotlight when he was rumored to be dating %cKylie Jenner% in the same year. After months of romance rumors, the two finally made their relationship Instagram official in May.

While working on his third album "Astroworld", which was named after an amusement park in Houston, Travis announced a collaborative album with Quavo titled "Huncho Jack, Jack Huncho". The set hit the stores on December 21 and debuted at No. 3 on Billboard 200 chart.

2018 kicked off with a good start for Travis. He welcomed his first child with Kylie, Stormi Webster, on February 1. Furthermore, "Astroworld" was released to critical acclaim. The effort, which made its way out on August 3, debuted atop Billboard 200 with 537,000 units, becoming the second-largest debut of the year after %cDrake%'s "Scorpion".

Not only the album, but the singles off "Astroworld" were also commercially successful. Its second single, "Sicko Mode", debuted at No. 4 on Billboard's Hot 100 before topping the chart after spending seventeen weeks in the top ten. It also became the first hip-hop song in history to spend at least 30 weeks in the weekly chart's top ten.

In addition to topping the chart, "Sicko Mode" received Best Rap Performance and Best Rap Song nominations at the 61st Annual Grammy Awards that was held on February 10, 2019 in Los Angeles, while "Astroworld" was nominated for Best Rap Album. Unfortunately, he had to give up the trophy to %cCardi B% who won the award for her debut album "Invasion of Privacy". His loss made headline at the time as people believed that he should have won instead of Cardi.

Besides making headlines over his Grammy snub, Travis also got people talking in the same month following his guest performance at %cMaroon 5%'s Super Bowl LIII halftime show in Atlanta, Georgia. But rather than receiving praises, his performance with the seven-piece band was met with major backlash as people thought that their set was nowhere near great.

Travis continued making music despite the backlash, teaming up with %cThe Weeknd% and %cSZA% for "Game of Thrones" final season soundtrack "Power Is Power". Later in August, he released his documentary "Travis Scott: Look Mom I Can Fly" on Netflix.

His personal life was once again put in the spotlight when it was confirmed in October that he called it quits with Kylie after two years of dating. People were speculating that he might be cheating on the makeup mogul, but the rapper was quick to shut down the rumors. There were also people who were convinced that the two faked their split to promote his latest single, "Highest in the Room", which came out on October 4. While the speculation had never been responded, the single itself debuted at No. 1 on Hot 100 and became his second chart-topping song.