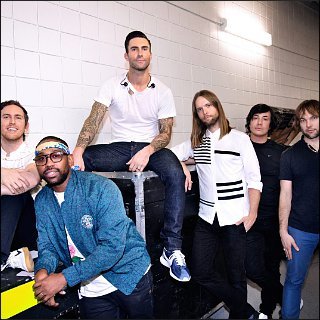 The origin of %cMaroon 5% could be tracked back to 1994 when Adam Noah Levine (born March 18, 1979 in Los Angeles, California) and Jesse Royal Carmichael (born April 2, 1979 in Boulder, Colorado) were still the students of Brentwood High School in Los Angeles, California. One night, they went out together with Adam's old friend, Ryan Michael Dusick (born September 19, 1977 in Los Angeles, California) who was an alumni from the same school. All of them came up with an idea to make music together as a pop rock band which they quickly named Kara's Flowers. Looking for one more member among the other schoolmates, they were finally joined by Michael Madden (born May 13, 1979 in Austin, Texas) after he responded positively upon their request to include him in the band.

With Adam in vocal also guitar, Ryan in drums, Jesse in guitar, and Mickey in bass, Kara's Flowers made their first performance at West Hollywood's Whisky A Go-Go on September 16, 1995. Creating quite a buzz during their journey around some other clubs in L.A., the band were successfully signed to Reprise Records, a division of Warner Music Group, and thus released their debut album, "The Fourth World" in 1997.

Unfortunately, it did not turn out well for the record only sold five thousand copies and was considered as a failure. Disappointed, the quartet decided to leave Reprise in 1999, turning their attention to education. Ryan and Mickey chose to study at UCLA while Adam and Jesse entered Five Towns College in Long Island, New York.

During this period, Adam began to develop an interest in other music genres which all are basically known as black music. "We were living at a predominately African-American school, and Jesse and I fell in love with R&B, soul and hip-hop," he recalled. "The halls would be blasting gospel music, and people would be listening to stuff that we'd never actually listened to, like %cBiggie Smalls%, %cMissy Elliott% and %cJay-Z%."

Unable to resist the desire to play music again, both Adam and Jesse decided to give up their study, thus immediately returning to L.A. where they reunited with Mickey and Ryan. As the band added some elements of black music, particularly R&B, to their explosive rock & roll sound, Adam started to develop a new style in singing and songwriting.

With this change, the band decided to start it all over again, holding some performances around the city. At one of their shows in 2001, they met James Burgon Valentine (born October 5, 1978 in Lincoln, Nebraska) who was the guitarist of a band called Square. Blown away by James' talent, James joined them after going through some heavy conversation to convince him. That was when the personnel came up with the idea of a new identity for the band.

"We clearly weren't Kara's Flowers anymore, with the addition of James and an entirely new approach to music," Adam explained. "Also, if you name a band when you're 15, by the time you're 23 you're probably not gonna like it very much." Without spending too much time, they eventually agreed to use the name "Maroon 5."

Relying on the unique tunes which were clearly visible in their captivating compositions, Maroon 5 once more gained notice from some music labels, including Octone Records. This New York City-based independent label afterwards signed the band in a joint venture deal with J Records by the spring of 2001. Under the guidance of producer Matt Wallace, they recorded the materials for their debut album throughout the winter before it was released on June 25, 2002.

Entitled "Songs About Jane", it first gained number 102 on the Billboard 200 Album chart, then climbed wonderfully to the 6th rank in 2004. The band continued to become increasingly popular when their two songs, "This Love" and "She Will Be Loved" secured the 5th position of the Billboard Hot 100.

The brilliance of "This Love" and "She Will Be Loved" to reach the top spot of Billboard Top 40 Mainstream in 2004 propelled the sale of "Songs About Jane." The album went multi Platinum in U.S. and Australia while also was certified Gold in some other countries. Following this tremendous attainment, Maroon 5 launched a live album, "1.22.03.Acoustic", which was recorded at the Hit Factory in New York during their 2004 tour. Containing the unplugged versions of the tracks from the previous album, it gloriously scored another Platinum for the band.

More and more achievements were obtained, thus reaching its peak when they received two nominations at the 47th Annual Grammy Awards held on February 13, 2005. Nominated for Best Pop Performance by a Duo or Group with Vocal through "She Will Be Loved" and Best New Artist, they satisfyingly took home the latter.

After becoming an opening act for %cThe Rolling Stones% on their North America tour, Maroon 5 launched another live album entitled "Live-Friday the 13th" on September 20, 2005. Recorded at The Santa Barbara Bowl, it came up in CD/DVD format and included some previously unreleased tunes from the band. Still in the same year, the quintet also revealed their intention to work on their sophomore album. Looking on the fantastic result of their first album to sell over 6 million copies worldwide, the band indeed faced a hard task as they were expected to repeat the same accomplishment.

Nevertheless, with their remarkable talents and skills, it seemed that they would be able to create another sensation through this next work. It was proven true upon the release of sophomore album "It Won't Be Soon Before Long" on May 22, 2007. The first single titled "Makes Me Wonder" which Adam claimed to 'hate' for a long time eventually brought an initial success for the album by jumping 63 places to #1 in Billboard Hot 100 chart.

Unlike other artists who usually rushed their albums in every 1 or 2 years, Maroon 5 took their time when it comes to making music. Their third album "Hands All Over" came out in September 2010, around 3 years after the sophomore set. "Misery" was released as the first single and followed by "Give a Little More".

The band shined a little more in 2011 as they released "Never Gonna Leave the Bed" as the third single off "Hands All Over". Then frontman Adam announced a new stint as the judge of new singing talent contest "The Voice". Beside earning the band a spotlight, the job also resulted in a collaboration with fellow judge %cChristina Aguilera% on the single "Move Like Jagger". The song was released as fourth official single.

"Jagger" debuted on number #8 on Hot 100, the first Top 10 for Maroon 5 and Aguilera, since "Makes Me Wonder" and "Keeps Gettin' Better". It later climbed to number 3. Speaking of the single's success, James said that they hoped to quickly follow it up with another album. "We're going to turn around a lot quicker and hopefully have something out by next year, earlier next year," he said in an interview dated August 16, 2011. "We've got a mobile recording rig. We're gonna try to start writing songs while we're out here on tour, so hopefully that'll go well."

In early 2012, member %cJesse Carmichael% announced he would take a break from the band for an undetermined amount of time to focus more on his studies of "music and the healing arts" (spiritual healing). Meanwhile, the band continued working on their fourth LP, "Overexposed", with the help of touring member PJ Morton. Described as the band's "most diverse and poppiest album yet," it spawned several hits including "Payphone" that they premiered on "The Voice" and peaked at No. 2 on Billboard 100 and "One More Night" which reached No. 1 on the chart. Released on June 26 that year, "Overexposed" peaked at No. 2 on Billboard 200.

In 2014, Maroon 5 came back with a new record as Carmichael rejoined the band. In April, they announced "V" as the title of what would be their fifth studio effort. "Maps" was released as the first single off the project, which arrived on September 2 through Interscope Records.

The band started their tour to promote the album in February 2015. Later that year they released their first greatest hits album, "Singles", via Interscope and 222 Records. It contains 12 singles taken from their previous studio albums.

Maroon 5 returned with new music in October 2016, when they dropped "Don't Wanna Know" featuring %cKendrick Lamar%. The song would be featured on the upcoming video game "Just Dance 2017". It made its debut on Billboard Hot 100 at No. 9.

Following the release of the song, Adam announced in early 2017 that the band was working on their sixth studio album "Red Pill Blues". After further announcing that the album would be released in November 2017 at the 2017 Teen Choice Awards, the band released its lead single "What Lovers Do" featuring %cSZA% on August 30. The song peaked at No. 9 on Billboard's Hot 100 chart.

"Red Pill Blues" was released on November 3. It debuted and peaked at No. 2 on Billboard 200 chart, becoming the band's sixth top ten album. In the following year, the set was certified Platinum by the RIAA. The third single off the set, "Girls Like You" featuring Cardi B, was released on June 5. The song set the record for the fourth-biggest leap on the Hot 100 ever after jumping from No. 94 to No. 4. The music video for the song featured cameo appearances from the likes of %cCamila Cabello%, %cGal Gadot% and %cEllen DeGeneres%.

In support of the album, Maroon 5 embarked on Latin and North America tour. The 43-date trek began on March 1 in Quicito, Ecuador and is scheduled to conclude on October 15 in New York City. Julia Michaels serves as the supporting act during the tour.