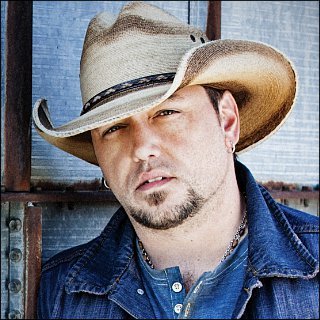 %cJason Aldean% was born on February 28, 1977. After his parents, Barry and Debbie, were divorced, he mainly lived with his mother in Macon, Georgia. During the summer, he would spend time with his father in Homestead, Florida.

Jason learned how to play guitar during his brief stay with his father in the summer. When his father went to work, he would pick up the guitar and a note of guitar chords left by his father for him to learn. His favorite songs at that time were %cGeorge Strait%'s "The Cowboy Rides Away", %cHank Williams Jr.%'s "The Blues Man", and %cAlabama%'s "My Home's in Alabama".

Realizing that Jason indeed has a talent in music, his parents both supported and encouraged him to develop his skill. When he was 14 and wanted to perform on-stage after watching Country Music Awards on TV, his mother tried to get him singing at a local event for the Veterans of Foreign Wars of the United States (VFW). At the VFW, Jason sang %cJohn Anderson%'s song "Seminole Wind" and %cTracy Lawrence%'s "Sticks and Stones". The audience, all ten, applauded him and that made him even more drawn into music.

After graduating from high school, Jason and his band performed at several small events with the help from his father. With bandmate %cJustin Weaver%, he began writing his own songs and later performed them during a showcase taking place at Atlanta's nightclub The Buckboard.

Jason was approached by Michael Knox from Warner-Chappell song-publishing company and signed to it at the age of 21. A month after signing a deal, he moved to Music City and was offered a recording contract but was subsequently dropped. He inked a new deal with another label but again was dropped.

Three years went by and Jason still hadn't recorded any studio album. His chance came in 2004 when he was offered a deal by Broken Bow Records in Nashville. He worked on an album titled "Jason Aldean" and dropped it in early 2005. The record contained chart-topping singles such as "Why", "Hicktown" and "Amarillo Sky". In 2006, he was named Top New Male Vocalist at Academy of Country Music Awards.

In 2007, Jason entered studio with producer Michael Knox to record songs for his sophomore effort "Relentless". The album debuted at number four on Billboard Hot 200 and landed atop Country Albums chart. His singles in the album include "Johny Cash" and "Laughed Until We Cry".

Jason's third installment was called "%cWide Open%". He dropped it in the U.S. on April 7, 2009 and it reached No. 4 on Hot 200. First single from the record was "She's Country" and it ruled Billboard Country Singles chart and number 42 on Hot 100. The other two singles that followed, "Big Green Tractor" and "The Truth", also managed to reign the U.S. Country Singles chart. In that year, he also got 3 nominations at CMT Music Awards, including Video of the Year, for "The Truth" clip.

A year later, Jason moved on to his fourth effort "My Kinda Party". Giving fresh sound which "stands at the forefront of a movement combining country themes with hard-rock chords," this album might be his strongest album to date. He rocked out with %cKelly Clarkson% in "Don't You Wanna Say" and made a duet with her at 2010 Country Music Association Awards. Making its way out across the country on November 2, the album itself debuted two spots higher on Hot 200 than its predecessor.