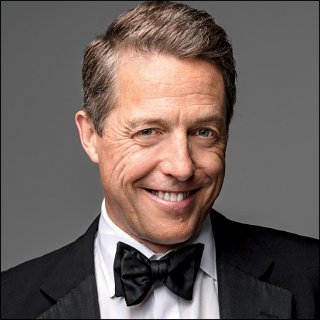 Crossing the Atlantic to emerge into Hollywood with his fine blend of good looks and solid acting skills, Hugh Grant has really established a brilliant career to soar as one of the most prominent British actors in the competitive world of American film industry. Born Hugo John Mungo Grant on September 9, 1960 in London, England to James and Fynvola Grant, the star first tried his hand at acting during his years at the city's Latymer Upper School through its musical production which distressingly turned out to be an unsuccessful one for the hopeful boy. Surprisingly, instead of feeling disappointed, his passion for performing grew even bigger, prompting him to look for more experience when continued his study at Oxford's New College majoring in English.

Enthusiastically honed his craft in Oxford University Dramatic Society then took part in film feature entitled "Privileged" (1982) produced by the Oxford Film Foundation, Hugh actually was a bit unsure about his future as an actor after obtaining his B.A degree in 1982, but finally fixed his mind to join %cThe Jockeys Of Norfolk% in which he gradually developed a knack in comedy. The troupe itself was doing good in stage show business around that time, so it was not surprising to later see them having their own TV program yet it disappointingly fell through within a short time, mainly because their comedic style was better suited to theater, and this failure ultimately led to the crew's split, much to Hugh's dismal. Chose to keep sticking to small screen, the attractive young man slowly tried building his own way afterwards, playing a series of forgettable TV roles for 2 years before delightfully shifted to movie feature in %cJames Ivory%'s "Maurice" (1987).

Managed to gain initial attention from the audience there, particularly after shared the Best Actor Award with co-star %cJames Wilby% at Venice Film Festival held by the same year, Hugh optimistically walked on his path to star in other wide-screen productions continuously, most notably that of "Four Weddings and a Funeral" (1994). Delivering an excellent portrayal of Charles, a frequently tongue-tied but profoundly charming Englishman, he no doubt enchanted audiences and critics alike, including those in the States, to later wonderfully receive the prestigious BAFTA Award and Golden Globe Award in 1995 both for Leading Actor category. Coupled with the flick's great commercial result of over $52 million in U.S theaters, this glorious attainment unquestionably propelled the striking guy to widespread recognition while gave him more than enough buzz to enter Hollywood film industry as well.

Amidst this accomplishment, however, a scandal shockingly occurred a month before the release of his first Hollywood picture, "Nine Months", in July 1995, threatening to ruin his career that had just flourished increasingly. It was an arrest for suspicion of lewd conduct in public place upon being found with a prostitute named Divine Brown or Stella Marie Thompson in his car near Sunset Boulevard in Hollywood. Received two-years probation besides a $1,180 fine later that year, he inevitably became a major headline on most tabloids judging from the vast publication of his mug shots for several months after the incident, so no wonder many predicted it would be the end of his stardom consequently. At first, that was likely to happen as the dark-haired actor encountered poor response from the audience for his performance in "Extreme Measures" (1996) to then be nowhere to be seen onscreen for some time, until his return through "Notting Hill" in 1999.

Thanks to "Four Weddings" writer %cRichard Curtis% who took the risk to give him the lead opposite %cJulia Roberts% in that charming romantic comedy that Hugh finally was able to regain his position in the center of the spotlight when the movie amazingly garnered more than $116 million in its domestic run. Already won back public support on him with a heartfelt apology given to his family and girlfriend, at that time was %cElizabeth Hurley%, on "The Tonight Show", he went incredibly undisturbed along the way, creating a string of box-office success through "Bridget Jones's Diary" (2001), "About a Boy" (2002), "Two Weeks Notice" (2002), "Love Actually" (2003), and "Bridget Jones: The Edge of Reason" (2004). Next slated to appear in two high-profile features of 2006 namely "American Dreamz" also "Music and Lyrics", the future seems to look bright indeed for this star to keep shining throughout the decade.

Concerning his love life, Hugh has been known to be a Hollywood heartthrob and has dated some beautiful women, most notable one presumably being Hurley whom he starred alongside in "Remando al viento" or "Rowing with the Wind" (1988). Established a longtime relationship since 1986, the pair sadly broke up in 2000 but remained good friend and business partner, setting up together Simian Films in 1994 through which they produced two of Hugh's movies of "Extreme Measures" and "Mickey Blue Eyes" (1999). Following the split, the handsome star later was spotted romancing a UN worker named %cKasia Komorowicz% then his personal trainer, %cDana Verbytska%, before fell into the arms of %cJemima Khan%, former wife of famous Pakistani cricket player-turned-politician %cImran Khan%, in 2004. Unfortunately, the bond wasn't eternal as both then decided to call it quit in February 2007 after dating for three years.