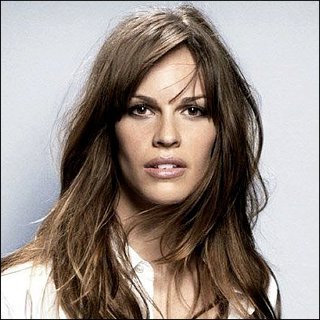 Hilary Ann Swank, born on July 30, 1974 in Bellingham, Washington, is an American actress. She was firstly discovered as a talented little actress by producer %cSuzy Sachs%, from whom she learned acting. At her 9-year age, Swank began to star in her first play, "The Jungle Book," as Mowgli and kept continuing her regular appearances in local theater and school plays. Beyond her acting lessons, Swank spent her time studying at Sehome High School in her hometown, where she used to live with her family until she was 16. During senior high, she often competed in the Junior Olympics and Washington State championships in swimming and was ranked at #5 in the state in all-around gymnastics. Her achievement in gymnastic has made Swank proud and handed the beauty her breakout role in the sequel of "The Karate Kid" series named "The Next Karate Kid" (1994) where she played along with %cPat Morita%.

In 1990 Swank and her mother, Judy Swank, moved to Los Angeles area where they, for a short period of time, impoverished and lived out their car. There in L.A. she enrolled in South Pasadena High School and started acting professionally. Her willingness to pursue an acting career resulted in her appearance in "Buffy the Vampire Slayer" released in 1992. It is a movie tells a flighty teenage girl learns that she is her generation's destined battler of vampires. Ever since, Swank received more and more challenges to star in several other movies. In 1997, she got the role of Curly on TV show "Beverly Hills 90210" and ended it in 1998 when she was kicked out from the serial. After that, she played in "Boys Don't Cry", which is a 1999 movie based on the real-life story of %cBrandon Teena%, played by Swank herself, a transgender young man who was raped and murdered by his male friends after they found out he was born female. It was this flick that capitulated the actress to the stardom, made her a star while at the same time earned her a Golden Globe Award and an Academy Award for Best Actress in 1999.

Not only her Oscar success brought Swank critical praise, but also it resulted in more film offers, naming some were "The Gift" (2000), "The Affair of the Necklace" (2001), and the thriller "Insomnia" (2002) being in the same scene with senior actors %cAl Pacino% and %cRobin Williams%. Then in 2003 she secured a role in "The Core" followed after by a part in the made-for-TV movie "Iron Jawed Angels" for which she was nominated for a Best Actress Golden Globe. In the year of 2004 Swank scored a record with her action in %cClint Eastwood%'s movie "Million Dollar Baby". Starred in alongside Eastwood and %cMorgan Freeman%, she was billed to portray a champion boxer, a role that led her to win the 2005 Oscar and Golden Globe award for Best Actress, plus Outstanding Performance by a Female Actor in a Leading Role Screen Actors Guild Award. Already became a Hollywood A-list actress, Swank was subsequently booked to star in the 2006 drama mystery thriller "The Black Dahlia" as well as "Freedom Writers" and "The Reaping", which both were released in 2007.

Acting aside, Swank faced many ups and downs in her love life. She married actor %cChad Lowe% on September 28, 1997 after first met him at a 1992 Hollywood Athletic Club party where they were members at the AGAPE Spiritual Center in Culver City, California. Unfortunately after twelve years together, the couple was hit with heavy reports claiming their marriage was on rock. Struggling to cope with the speculation, the couple at last decided to go separate ways, publicly announced their split through the actress' publicist, saying "Hilary and Chad have decided to separate, but they are hopeful they'll be able to get through this tough time." After that worked hard to save their marriage, reports on their going to reconcile were proven false when Swank filed for divorce in May 2006, released a statement through publicist, claiming "Hilary Swank and Chad Lowe have jointly decided to divorce. They continue to be friends and have the utmost respect for one another." Keeping mum at first, she later on came clean about her divorce, blaming Lowe's "substance-abuse" problem to play an important role in their abrupt separation.

Not long after she announced the split, the movie actress was reported to have found new love with Hollywood top agent John Campisi who happened to be her agent at the powerhouse Creative Artists Agency. Keeping their relationship very private at first, Swank at last publicly confirmed their being together, released a statement in December that same year saying, "I'm dating a great guy. You rely on your friends when you go through something so big. My friends are my family." In the meantime, her acting career continued to run smoothly as she has already landed major parts in a handful of big screen productions, including "P.S., I Love You" (2008), "Labyrinth" (2008), "Laws of Motion" (2008), and "Intimate Strangers" (2010) apart from a cameo appearance in star-studded superhero flick "Iron Man" (2008) alongside %cSamuel L. Jackson%.