Sookie calls Jackson from the Bon Temps morgue to tell him that his son is dead. To comfort Sookie, Jackson tells her that while he and Alcide didn't talk much, when they did, he never heard him happier than when he was with her. Meanwhile, Jason makes an equally difficult call to Hoyt Fortenberry in Alaska, informing him that Maxine was killed by a vampire.

Aboard Anubis Air, Eric announces that they're making a stop in Shreveport to pick up Willa. Pam is aggravated by the change of plans and reminds Eric that his progeny probably hates him for abandoning her -- just like Tara hated her.

In a flashback to 1986 Shreveport, the consequences of Eric's kiss-off to Nan Flanagan are revealed. The Magister sentences Eric and Pam to manage a run-down video rental store in town, replete with the "largest collection of adult videos in Northern Louisiana." To prove that Shreveport is not the cultural vacuum it appears to be, the Magister points out that a tunnel in the basement was once part of the Underground Railroad.

Sam, Sookie and Jason arrive at the Bellefleur mansion. After promising Arlene's kids, Coby and Lisa, that she'll get their mother back, Sookie talks Andy into letting her "unglamour" Holly to learn where the others are being held captive.

At the Compton place, Jessica writhes in pain from her unhealed bullet wound. James begs her to eat, knowing that her self-starvation over her guilt for killing Andy's daughters is at the root of her problem. Jessica refuses and James retrieves Bill to command her to feed. When Sookie arrives looking for help saving Arlene and the others, she offers to feed Jessica -- but not a sympathetic ear. "I don't give a f*ck about you, or your problems," Sookie tells her coldly. "My friends are being held captive at Fangtasia, and I'm going to need a lot of help if I'm going to rescue them tonight."

Back in 1996 Shreveport, Ginger's origin is revealed. A smart, studious Tulane University student, Ginger is in search of old vampire movies for a research paper she's writing. But when Eric arrives, all sense goes out the window. Spotting a "Help Wanted" sign at the register, an enamored Ginger asks for an application.

Bill and Sookie plan the night's attack on Fangtasia, though Bill warns her that they're going to be outnumbered. Hoping to increase his strength, Sookie feeds Bill. Meanwhile, Lafayette arrives to feed Jessica, whose wound heals at last.

While en route to Rosie's to deliver the bad news about Kevin, Sam turns the car around toward Fangtasia to save Nicole and their unborn child. Knowing they won't be safe without their vampire allies, Jason pulls his gun on Sam, ordering him to turn back around and stick to the plan.

Ten years after her arrival, Ginger continues to work for Pam and Eric at their video store. She reports for her shift, brimming with excitement and an old chair in tow. She tells Pam it's meant to be Eric's throne, as part of a new business in light of the fact that vampires have come out of the coffin. She reveals her idea for a vampire bar, Fangtasia, which Pam loves and subsequently glamours out of Ginger's mind, as she plans to claim it for her own. Aboard Anubis Air, Pam finally comes clean to her maker about the deception.

As the paltry group of vampires assembles at the Compton place, Eric and Pam arrive at his door. "Pam tells me you wrote a book in which you claim not to be an asshole anymore?" After Sookie spots Eric's Hep-V veins, the pair ask everyone for a moment alone. After revealing where he was, Eric asks Sookie about the trouble surrounding her. He summons Willa -- who is enraged to see him again -- and commands her to help Sookie rescue her friends from Fangtasia.

With Eric's knowledge of the Underground Railroad tunnel, Sam, turned rat, emerges from a fan in the wall of Fangtasia's basement. He morphs back into his human form, assures Nicole and the others that help is on the way, and returns to the outside to fill in the others. Bill punches his way through the sealed tunnel, and he and Pam head in for the rescue. Unfortunately, Arlene has just been taking upstairs by one of the H-Vamps.

Eric knocks on the door of Fangtasia and reveals himself as the former area sheriff. He explains that he's brought his own food and just needs a safe place to stay. Smelling Sookie, the H-Vamps agree to let him in. He's soon joined by Bill and the others, but their attack is cut short when the vigilantes arrive and throw Molotov cocktails into the former bar. While the others do battle outside, Sookie begs an extremely weak Eric to find a healthy vampire to save Arlene.

Sookie holds a dying Arlene in her arms, begging her to stay alive. She listens in on Arlene's thoughts and hears her and Terry talking. Just as Arlene agrees to join Terry on the other side, Keith -- a vampire drummer in James' band -- rushes in and feeds Arlene. She continues to hallucinate, seeing Terry in Keith's place, but as the vampire blood revives her, Terry agrees she should stay behind with the kids and tells her to be happy.

With all of the vigilantes and H-Vamps dead and everyone else safe, Eric heads back into Fangtasia to see Sookie one last time. As she cradles Arlene, Sookie looks up at Eric and smiles, thanking him. The two share a wordless goodbye. 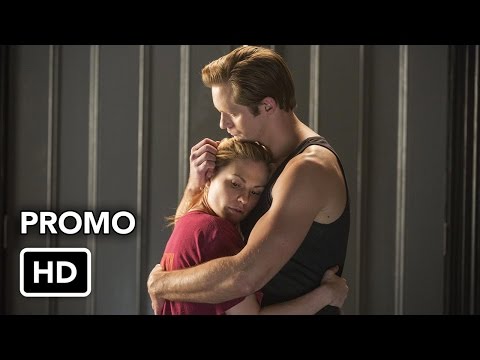