As Eric cleans up the mess that was Nan Flanagan, Bill leaves a message for Jessica--he will be away for a week. "My palace is your palace," he offers. Eric and Bill sense that Sookie is in danger and although Eric doesn't want to help, Bill heads for her place. Once they step outside, they are trapped by Authority soldiers and thrown into a car trunk.

Pam shows up at Sookie's looking for Eric, but instead finds Sookie and Lafayette holding Tara's lifeless body. Pam refuses Lafayette's request to turn Tara, until she gets Sookie to agree that she will repair the rift between her and Eric, and an IOU for a future favor. Deal negotiated, Pam feeds Tara some of her blood and is buried with her.

On Jason's doorstep, Reverend Newlin begs Jason to let him in, saying he has nowhere else to go. Although suspicious of Steve's fangs--he says "they're like twin hard-ons"--Jason is sympathetic and when he looks Steve in the eye... is immediately glamoured. Steve ties Jason up and confesses he's had feelings for him since they first met; his murderous streak was jealousy flaring. Although flattered, Jason tells Steve he's not gay, which only upsets Steve. Jessica enters and claims Jason as hers. As Jessica overpowers Steve, Jason revokes his invitation and Steve vacates, declaring "I love you!" as the door slams.

Pursued by Marcus' wolf pack, Sam goes to Luna to tell her she and Emma need to run. Luna insists that Sam tell them it was Alcide who killed Marcus, but Sam feels he owes Alcide for what he did for Tommy. Werewolf Rikki tracks Sam to Luna's place, and when she threatens Emma, Sam willingly goes along with her. Marcus' pack beats Sam for information. Martha, Marcus's mother and Emma's grandmother, tells Sam they need her son's body to honor him properly. She promises Emma and Luna's safety, and Sam leads the pack to Marcus' remains. Alcide, accompanied by Luna, shows up and admits he's the real killer. Martha and other members of the pack shift into wolves and start gnawing on Marcus' remains.

In the trunk of the car, Eric and Bill manipulate their bodies into position to use an umbrella to ignite the car's gas tank. As the Authority suit comes for them, he is staked by Nora, his female counterpart. Spotting Nora, Eric kisses her deeply. Nora is a chancellor of the Authority, but no one knows she and Eric share Godric as a maker. She is part of a faction that believes Eric and Bill should be rewarded, not punished, for protecting them from the necromancers. They prepare to go to ground as Nora's plan for freeing them is put into motion. Nora and Eric enter a shipping container to reacquaint themselves. "We fight like siblings, but we f*** like champions," he says after Bill complains about the noise. Eric takes a call from Alcide to relay the news of Russell Edgington's reemergence from the cement, while elsewhere, a man is dragged through an abandoned building and torn apart.

Patrick joins Terry and his family for breakfast and assures Arlene's kids that Terry was a hero. He's startled to learn they're living in the Bellefleur mansion because their house burned down. At Merlotte's Patrick tells Terry that he too lost his home in a fire. In fact, four of the guys in their squad have been burned out of their homes, and it's because of what happened in Iraq. Terry throttles Patrick to shut him up until Arlene catches him in the act. Patrick tells Terry he suspected Terry was behind the fires, or that he'd want to help... now he's not so sure.

Sookie cleans up Debbie's remains in the kitchen. She tells Lafayette that because she wanted to kill Debbie, she can't call the police and claim she acted in self-defense. The two of them also go back to Lafayette's house to take care of Jesus' body, but Lafayette freaks out when it's not there. Alcide shows up at Sookie's to warn her about Russell and insist she stay with him to be safe, but Sookie turns him down. As she tries to tell him about Debbie, Lafayette jumps in and tells the werewolf to "get the f*** outta our lives."

Having been claimed by Jessica, Jason arrives at the Compton house and is surprised to see she's hosting a party. He hides hurt when she tells him she was only protecting him from Steve, and removes his badge and uniform as he joins the party. Jason tries to connect with Jessica as they play Guitar Hero, but her attentions are elsewhere, so Jason leaves with a sorority girl. In his squad car, Jason turns down the girl's overtures since he knows how their relationship will play out.

A compatriot of Nora's hands Eric and Bill fake passports to start their new lives. Just as Eric kisses Nora goodbye, her team explodes in a hail of bullets. The three are surrounded by Authority soldiers.

Sookie and Lafayette keep vigil by Tara's grave. Pam crawls out, complaining about how dirty she is. Sookie digs at Tara's remains and starts to cry when Tara's body remains still. Suddenly, newborn vampire Tara speeds her way out of the hole and lunges for Sookie. 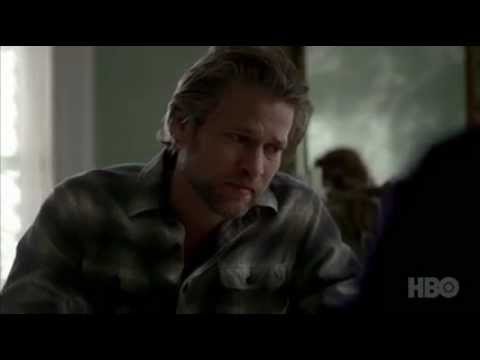 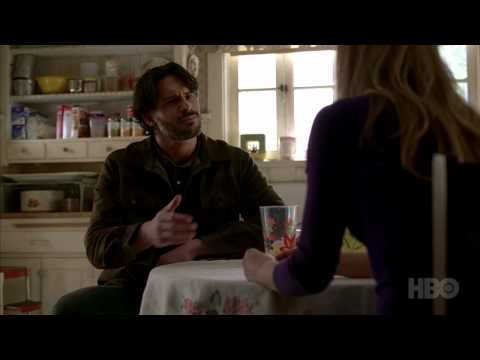 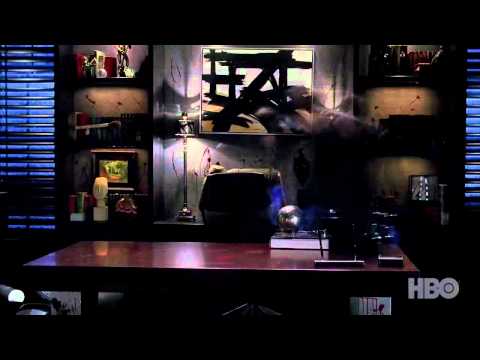