Antonia has successfully entered Marnie's body and in a Voldemort-meets-Quirrell sort of way, uses her human host to try to achieve her ultimate end: the destruction of every living vampire around. Her first step is to take mind-control of her Inquisition-era torturer and rapist, Louis. She forces him to kill Bill's lieutenant and finally fulfils the vampires' fear that humans will be able to control the dead. Of course, Marnie probably wouldn't have been moved to call upon Antonia if Eric hadn't provoked her in the first place, but we'll put that aside for now as we understand plausibility is not a chief aim of this show.

Pam, still in deterioration mode, attacks Tara and Naomi, but Tara gets lucky when a bunch of tourists come by and start snapping photos. "Is that a zombie?" one of them asks excitedly. To protect her vanity probably more than anything else, Pam releases Tara but warns her she'll come after her once more. Poor Tara. There is literally no one on this show who can get behind her. Naomi is nice and all, but part of us really wishes Eggs might be able to drop by from the dead for an episode or two. Back to the least compelling plotline of the series, Lafayette and Jesus, who are still holed up in Mexico and who have just realized Lafayette is capable of being possessed by spirits. After Jesus feebly tells his grandfather that he won't stay there any longer, the evil old man reveals to Lafayette that he, that is, Lafayette, is a medium. "You have the magic," he whispers conspiratorially to him in Spanish. We guess we're supposed to be shocked, but instead it just comes off as OBVIOUSLY.

Marcus the werewolf leader has rounded up his pack and is busy anointing Debbie and Alcide with deer blood. Debbie is thrilled but Alcide is more reluctant to join in the festivities and sits himself away from the pack. He feels badly about it, but is visibly relieved when Debbie says there's time to look for Sookie in the woods. This turns out to be a terrible idea, as the duo stumble upon a vigorously-moaning Sookie and Eric, who are still frolicking beneath the moonlight. The sight makes Alcide even more depressed, which Debbie immediately picks up on, because hey, what girl doesn't realize when her boyfriend is obsessed with someone else? This can't possibly end well for anyone involved.

Bill is pouring True Blood from an impressive-looking decanter when Louis wanders in on Marnie's orders. A struggle ensues and Louis ends up forcing a silver stake into his own heart, whispering the word "resurrection" before predictably exploding over Bill's spiffy king threads. Bill's face falls, but we're too busy noticing how much better he looks this season with a proper haircut to care very much.

Tara tells her girlfriend to get the hell out of town because as long as she sticks around, she'll be at risk when the vampires come. Just like "24," when everyone close to Jack Bauer ends up dying.

Across town, Jason is home recovering from being raped by many were-panthers but has luckily dodged the bullet of actually turning into one. He begins to fantasize about Jessica, a pairing that makes it seem like the show is taking one of Gossip Girl's tricks, the one where all the people who haven't slept together eventually do so. We hope for Hoyt's sake this doesn't end up happening, though his confession that it would kill him if he loses Jess is slightly alarming.

Meanwhile, Bill explains to his sheriffs that Antonia/Marnie will cast a spell to force every nearby vampire to meet the sun. To avoid mass incineration, he instructs the vampires to bind themselves with silver in their coffins, which will prevent them from heeding the call to turn up the sun.

Sookie and Eric are still having sex, though it's been well over 40 minutes by our count. They cuddle in post-coital bliss, with Eric tenderly telling her, "I'm listening to your heartbeat. I can feel it...every pulse."

Pam calls in an expert to administer "six shots four times a day" for the next, well, forever. The nurse helpfully says she can get Pam a bulk discount on the shots. Oh OK phew, we're sure Pam was worried about the health care premium.

Tara runs into Antonia/Marnie in the woods and joins forces with her, of course, because there wouldn't be a plot/it's so like Tara to do that when she should just clearly RUN to New Orleans. The vampires are busy shackling themselves in their hidey-holes in what amounted to a truly touching scene with Jess and Bill. Jess confesses she just isn't into Hoyt, and attributes her lack of interest to the disappearance of her human heart. Not so, Bill says. Her not loving Hoyt "doesn't mean you've lost your humanity. We're all, at our core, human." We knew Bill still had it in him!

Pam looks like My Vampire Barbie in her pink quilted coffin.

Sam realizes all isn't right when Luna tells him to eff off when he calls her to chat. Doesn't he realize by now he should always blame Tommy when in doubt? He and Luna realize Tommy has skin-walked, which accounted for his high fever and blood-laced vomit. Still, Sam has had it up to here with his brother and kicks him out once and for all. Is it just us or has this happened several times before? We think it's time to wrap up this plotline.

We finally get some comic relief in this episode with Andy and Holly's date. He's brought her Winn-Dixie flowers that he got on sale but he's freaking out because he hasn't had a hit of V yet. He ends up dashing out of the bar, sale-flowers in tow.

The show realizes it needs to make Lafayette somewhat relevant so a strange woman shows up in his kitchen whom only he and Arlene's demon-baby can see.

Antonia/Marnie, Tara and Co. get together for a fun afternoon of chanting Latin and force the nearby vampires to feel an irresistible pull toward the sun. All of them are able to fight it except for Jessica, who writhes against the chains and stumbles toward Bill's front door. Jason is on his way to save the day like he did at Steve Newlin's joint. 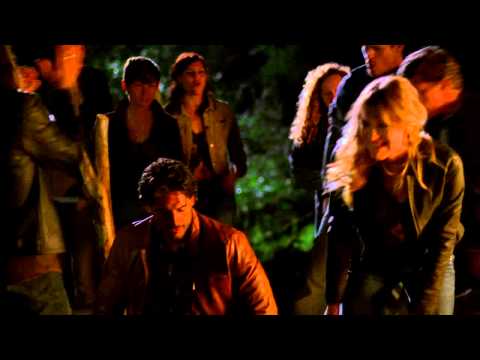 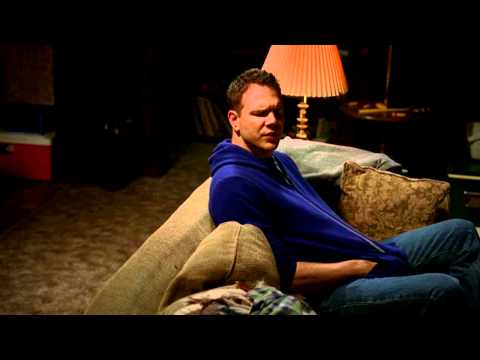