The Prince of Wales previously branded the sit-down 'deceitful' and said it should never again shown due to the underhand tactics used by journalist Martin Bashir to land the exclusive chat with Princess Diana.

AceShowbiz - Prince William will reportedly be "furious" footage from Princess Diana's infamous "Panorama" interview has been included in his brother's new Netflix series, "Harry & Meghan". He previously branded the sit-down "deceitful" and said it should never again shown due to the underhand tactics used by shamed BBC journalist Martin Bashir to land the exclusive chat in 1995.

Sources told the Daily Mirror on Thursday, December 8, William and his father King Charles will be "dismayed" the Duke of Sussex has "blatantly" ignored their wishes. They added "it shows just how little regard there is from the Sussex camp."

One insider told the publication on Thursday, "He (William) will be rightly furious about it. He couldn't have been clearer in the past and this is one thing he would have thought he and Harry were aligned on. Sadly once more it shows the gulf between the two brothers couldn't be wider."

During the first episode of "Harry & Meghan", released on Thursday alone with two other instalments, clips are seen of Diana speaking in her interview with Bashir, saying she hated being the "center of attention." Bashir has been shamed for faking bank statements and showing them to Diana's brother Earl Spencer to help get the interview.

He fraudulently claimed the documents showed senior royal courtiers were being paid for information on his sister. The false papers also gave the impression royal family associates were selling stories on Diana to the press.

In September the BBC's director-general Tim Davie promised the corporation would never show the programme or license it to other broadcasters. William said in a damning statement after the publication of a report into the scandal, "It is my firm view that this Panorama programme holds no legitimacy and should never be aired again. It effectively established a false narrative which, for over a quarter of a century, has been commercialised by the BBC and others. It is my view that the deceitful way the interview was obtained substantially influenced what my mother said."

"The interview was a major contribution to making my parents' relationship worse and has since hurt countless others. It brings indescribable sadness to know that the BBC's failures contributed significantly to her fear, paranoia and isolation that I remember from those final years with her," William continued.

Prince Harry said in response to the report he was worried Bashir's underhand practices were now "widespread" and "bigger than one outlet, one network, or one publication". He added, "The ripple effect of a culture of exploitation and unethical practices ultimately took her (Diana's) life."

Royal expert Dickie Arbiter was among those who slammed Netflix for including footage from the Diana interview in "Harry & Meghan", tweeting, "How come @netflix were allowed to use footage from #Diana #Panorama interview in documentary? 20 minutes into the first episode #Harry talks about mother and compares #Meghan to his mum saying she has the same confidence, passion and warmth." 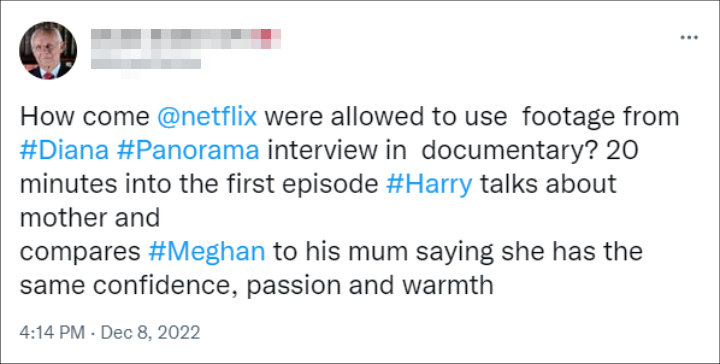 The Sussexes' Netflix show has made a number of claims about the royals, including that they had no protection from the Palace and accused aides of "planting" stories about them as part of a smear campaign. Sources have said King Charles and William are poised to respond to the show, but are unlikely to until the full series has been released, with another three episodes due on Netflix on December 15.

Prince Harry and Meghan Markle's Netflix Docuseries Mansion Is Up for Sale for $33.5M