The 'Take Control' emcee, who already faces two felony charges, gets hit with discharging a firearm with gross negligence charge on the first day of jury selection.

AceShowbiz - Tory Lanez has seemingly reacted to his additional felony charge in the Megan Thee Stallion shooting case. The "Say It" rapper has turned to his social media account with some cryptic posts after he was hit with a new charge.

On Tuesday, December 6, the 30-year-old hip-hop star made use of Twitter to seemingly express his feelings. "So happy god woke me up this morning …. [folded hands emoji]," he first posted. In a following tweet, he cryptically stated, "No weapon formed against me shall prosper …. EVER." 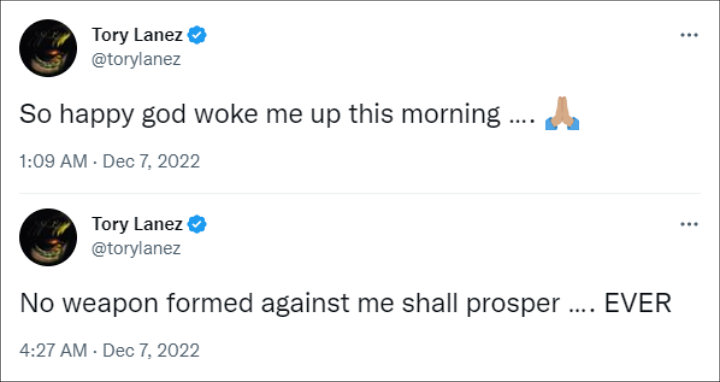 The posts came just hours after it's unveiled that Tory is facing yet another charge in the shooting case. On Monday, prosecutors added the new charge of discharging a firearm with gross negligence.

The new charge carries a possible six-year prison sentence and still qualifies as a deportable crime if jurors opt to convict him of negligent discharge as opposed to the more serious assault count. The charge came on top of Tory's previous two felony charges that include assault with a semiautomatic firearm and carrying a loaded and unregistered firearm.

If convicted on all counts, Tory is still facing the same maximum sentence of 22 years and eight months. The new charge doesn't add to the exposure because it relates to the same alleged conduct, so any related sentence would run concurrently.

Upon receiving the third charge, Tory's defense attorney George Mgdesyan told TMZ that he believes his client, born Daystar Shemuel Shua Peterson, is innocent. "We are confident that at the conclusion of this trial the truth will come out and Mr. Peterson will be exonerated of all charges," so said the lawyer.

The jury selection in the trial began on Monday. That same day, Tory got his ankle monitor taken off. Showing off the removal process to his fans during Instagram Live, the "Take Control" emcee said, "Today is the day! Get it out of here," before bursting out laughing.

Also on Monday, his lawyer George told the judge that Kylie Jenner and Kris Jenner's boyfriend Corey Gamble are on his list of possible defense witnesses because "they were present at Kylie's pool party before the July 2020 shooting. "The argument, everything started there," he said.

Tory is accused of firing a gun in the direction of Megan, whose real name is Megan Jovon Ruth Pete, at a home in the Hollywood Hills at about 4:30 A.M. on July 12, 2020. He, however, insisted that the "Hot Girl Summer" raptress lied to the police as he believes she actually hurt herself after stepping on glass.

The trial of the case was initially set to kick off in September but was pushed back after Tory asked a judge to delay the start date due to his defense lawyer Shawn Holley being preoccupied with other trials.