The 55-year-old Academy Award-winning actress takes part in an auction to benefit Broadway Cares/Equity Fights AIDS and offered up six figures for the signed hat.

AceShowbiz - Nicole Kidman bid $100,000 for Hugh Jackman's hat. The "Eyes Wide Shut" actress attended the show on Saturday, November 26, where she took part in an auction to benefit Broadway Cares/Equity Fights AIDS and offered up six figures for the signed hat.

Following the bidding, the "Music Man" actor wrote on Twitter, "The generosity emanating from #NicoleKidman leaves me speechless! You ARE amazing. Thank you for your friendship and support!"

After successfully winning Hugh's piece of costume, Nicole walked up to the stage to collect the item and modelled it as she returned to her seat. She said, "I love you and I love Broadway. And I love what they do at Broadway Cares. But also, what I want to say is that the show was extraordinary. Thank you."

Upon returning home after the show, which is due to close in January after a run of just over a year, Nicole showed the hat off to her 8.7 million followers as she acknowledged Hugh and his co-star Sutton Foster before bidding them goodnight. She wrote, "The hat we bought at the auction. NIGHT NIGHT" 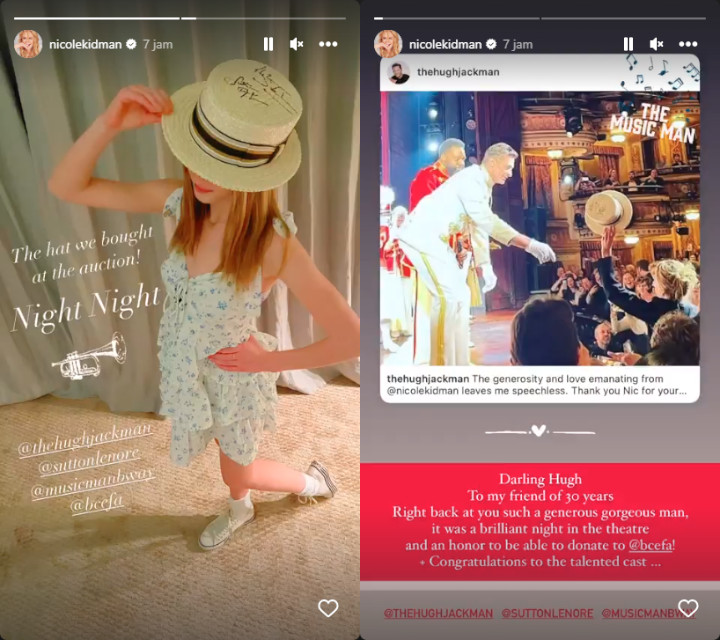 When Nicole noticed the words that the "Les Miserables" star had written about her on Twitter, she replied where she paid tribute to Hugh as a "gorgeous man" who she has known for three decades.

She wrote on Instagram, "Darling Hugh, to my friend of 30 years. Right back at you such a generous, gorgeous man, it was a brilliant night in the theatre and an honor to be able to donate to @bcefa! +Congratulations to the talented cast."

Nicole Kidman Praised for Being 'Great in Crisis'