The Chani depicter, who has been less active on social media, is busy filming the sequel to the 2021 epic sci-fi movie in Abu Dhabi, which stands in for the fictional desert planet Arrakis.

AceShowbiz - Zendaya Coleman has gives a behind-the-scenes look at "Dune: Part Two" while filming is still underway. Having been less active on social media because of her work commitments, the actress has shared an update by posting a photo from the set of the highly-anticipated sequel.

On Wednesday, November 16, the 26-year-old took to her Instagram Story to upload a set picture of the picturesque sunset on Arrakis. "I know I've been quiet, but I'm here, just workin as usual," she wrote over the image. "Anyway sending love from Arrakis [a red heart emoji]." 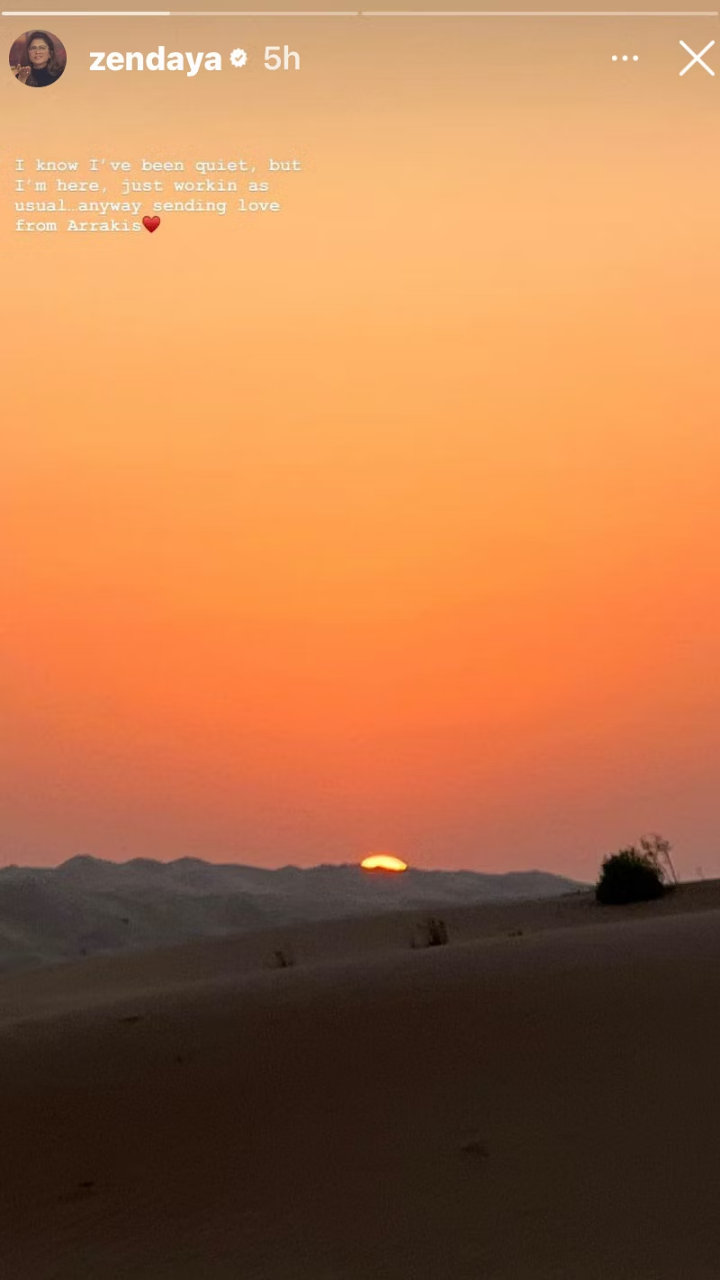 The "Dune" sequel is currently in production in Abu Dhabi, which serves as a stand-in for the fictional desert planet Arrakis. Filming of the movie began in July this year in Budapest, Hungary, with pre-shooting productions also taking place in Jordan and Italy.

Zendaya will reprise her role as Chani, a young Fremen woman and the love interest of Timothee Chalamet's character Paul Atreides. While she had a small supporting role in the first movie, she is set to become a co-protagonist in the upcoming movie.

"She hasn't wrapped yet, and it's amazing," Timothee recently told Variety about Zendaya's role. "She's bringing exactly what she brought to the first one - which was incredible - but in greater abundance."

Of his relationship with the Emmy-winning actress in real life, the "Bones and All" star gushed that she "has really become a sister" to him. "I'm so grateful to count her as a partner and a sister and a friend," he went on sharing, adding that it's "amazing" for the two to share stories about working with Luca Guadagino, the helmer of Timothee's films "Bones and All" and "Call Me by Your Name" (2017) who directed Zendaya in "Challengers", set for release in 2023.

"Dune: Part Two" has Denis Villeneuve back at the helm. Covering the second half of Frank Herbert's novel of the same name, it also has Rebecca Ferguson (II), Josh Brolin, Stellan Skarsgard, Dave Bautista, Stephen McKinley Henderson, Charlotte Rampling and Javier Bardem reprising their respective roles, with Florence Pugh, Austin Butler, Christopher Walken and Lea Seydoux among new cast members. The movie is due out on November 3, 2023.

'Dune' Fans Will Be 'Surprised' and Shocked When Its Sequel Releases, Promises Javier Bardem