The death of the Emmy Award winner is mourned by author Jonathan Allen, who remembers the executive producer as his 'very first friend' and 'a creative genius.'

AceShowbiz - "Schitt's Creek" executive producer Ben Feigin has died aged 47. The Emmy Award winner passed away on Monday, October 24, after suffering from pancreatic cancer, a representative for the producer confirmed to The New York Post newspaper.

Ben had been a huge part of the success of the CBC sitcom after he found non-traditional financing and sold the series to several licensees around the world. He was also behind the show's Netflix documentary, "Best Wishes, Warmest Regards: A Schitt's Creek Farewell", and was the brains behind the programme's international Live Nation tour and its pop-up immersive experience.

Ben landed an Emmy Award in 2020, and both a Golden Globe and Producers Guild Award in 2021. Author Jonathan Allen has paid tribute to his late pal Ben, admitting his memory is a "blessing".

He wrote on Twitter, "My very first friend, Ben Feigin, died Monday. The world knew him as an Emmy-award-winning executive producer of Schitt's Creek and a creative genius. I will never forget our countless one-on-one baseball games. His memory is a blessing." 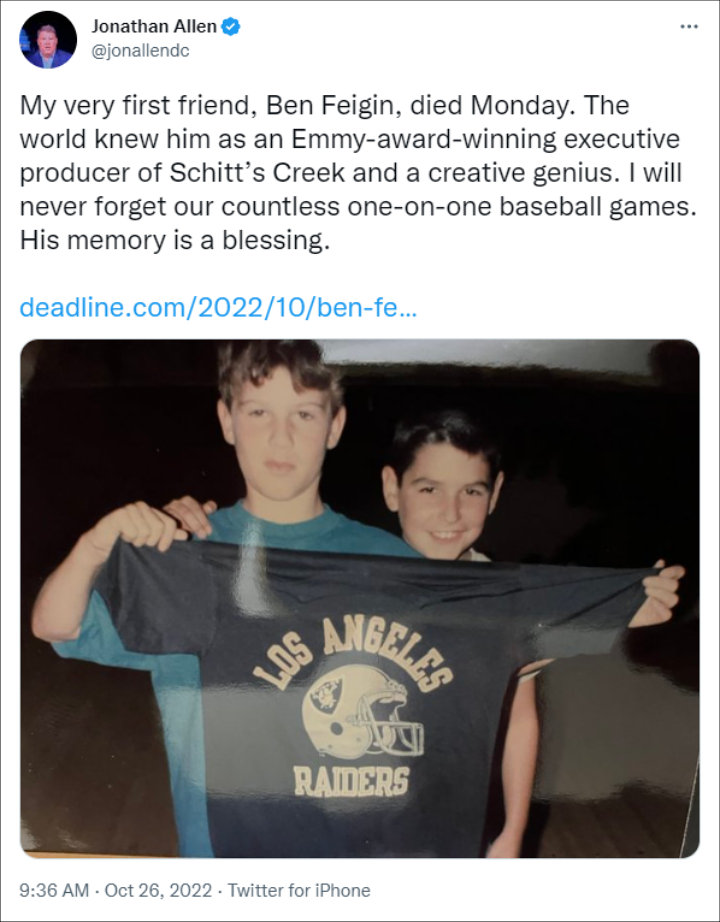 The late producer is survived by his wife, talent agent Heidi Feigin, and their 11-year-old daughter, Ellie. "Schitt's Creek" ran for 80 episodes and one special from 2015 to 2020, and the comedy starred "American Pie" actor Eugene Levy (Johnny Rose) and "Home Alone" actress Catherine O'Hara (Moira Rose).

It followed the trials and tribulations of the formerly wealthy Rose family. The show was created by Eugene and his son Dan Levy, and the pair also executive produced alongside Ben, Andrew Barnsley, Kevin White, David West Read and Eugene's brother Fred Levy.