Taking to her social media platform, the 42-year-old actress/comedienne thanks God for 'getting rid of the mess' things around her as she 're-decorates' her life.

AceShowbiz - Tiffany Haddish believes God will always save her. In a new social media post, the "Girls Trip" actress has insisted that no one can "cancel" her after she was hit with child sex abuse lawsuit.

On Thursday, October 12, the 42-year-old actress/comedienne turned to her Twitter account to thank God for getting rid of the messy people and things around her as she "re-decorates" her life. "God has been redecorating my life lately and I must say at 1st I was very uncomfortable. But I see where he is going with it and I am so much better off. Thank You God! You are the best at getting rid of the mess. (and when I say mess you know who and what I mean God) Amen," she wrote.

Later, one of her followers said she hopes Tiffany doesn't get "canceled" as writing, "Best of luck young lady hope they don't cancel you not judge you because I don't know the facts but [praying hands emojis] For you." In response, the "Night School" actress declared, "Only one cancel me is God!" 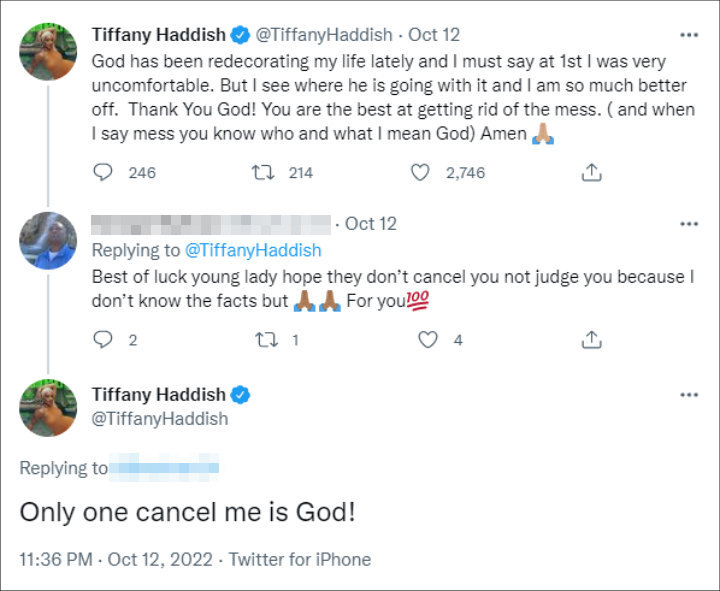 Tiffany Haddish believes no one can 'cance' her after being hit with child sex abuse lawsuit.
Editors' Pick

Tiffany and fellow comedian Aries Spears were accused of grooming and molesting a sister, who is now 22 years old, and her younger brother when they were 14 and 7 years old, respectively, in a lawsuit filed in September. The alleged victims claimed Tiffany coerced them into participating in explicit comedy skits, one of which was titled "Through a Pedophile's Eyes".

Then in late September, the case was dismissed. According to court documents obtained by TMZ, the plaintiff asked the judge to dismiss the case with prejudice, meaning it cannot be refiled in the future. In a statement, the plaintiff said, "My family and I have known Tiffany Haddish for many years and we now know that she would never harm me or my brother or help anyone else do anything that could harm us."

"We wish Tiffany the best and are glad that we can all put this behind us," Jane, who accused Tiffany and Aries of allegedly grooming her and her younger brother when they were 14 and seven, respectively, continued. She did not have anything to say about Aries, who was also accused of some pretty heinous stuff in the suit but he's also in the clear.

Following the lawsuit withdrawal, Tiffany claimed that she "lost everything." In a quick interview with TMZ, she confessed, "All my gigs, gone. Everything, gone." She went on stressing, "I don't have no job, bro."