The 'Black Widow' raptress assures her fans that her rumored boyfriend has 'a great ear' after many criticized her decision to place her next album in his hands.

AceShowbiz - Iggy Azalea is defending her decision to place her upcoming music in Tory Lanez's hands. The "Black Widow" raptress, who's reportedly in a relationship with Tory, has spoken out after fans were upset that the "Say It" rapper will produce her upcoming album.

On Friday, October 7, the 32-year-old female emcee turned to Twitter to address the criticism. "You're all very welcome to speak your opinion freely about me…," she began. "just as long as we all have an understanding: you are having a monologue & not a discussion with me - because (respectfully) my bills remain paid without your two cents," she concluded, adding a red heart and smiling face emoji. 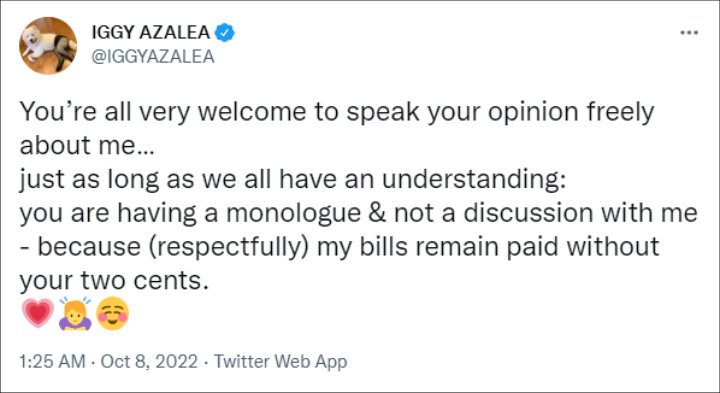 Iggy Azalea addressed criticism over her decision to place her next album in Tory Lanez's hands.

One fan replied to her tweet, "Hope it's good. Never heard a Tory Lanez song," to which Iggy replied, "He's not writing or making beats. He's EPing my project which basically means Helping to find the right producers, features & craft a cohesive sound. My albums not gonna sound like his music, it will sound like mine but with better production!" She later gushed over her alleged boyfriend, "Hes got a great ear! [smiling face emoji]."

Later, a separate person asked Iggy, "will this album have r&b? I instantly tought of it when tory made the announcement." In response, Iggy teased, "Nope just rap."

Iggy's post came after fans criticized her for letting Tory executive produce her next album. Earlier on Friday, Tory announced the news via Twitter, "The first FEMALE URBAN ALBUM i will EXECUTIVE PRODUCE will be @IGGYAZALEA Next Album !!! [fire emoji]."

"I've been wanting to E.P a FEMALE ARTIST ALBUM for a while … I want to RAISE THE BAR," Tory added. "On the BEATS, PRODUCTION & OVERALL EXPERIENCE of FEMALE ALBUMS … this is going to be fun." 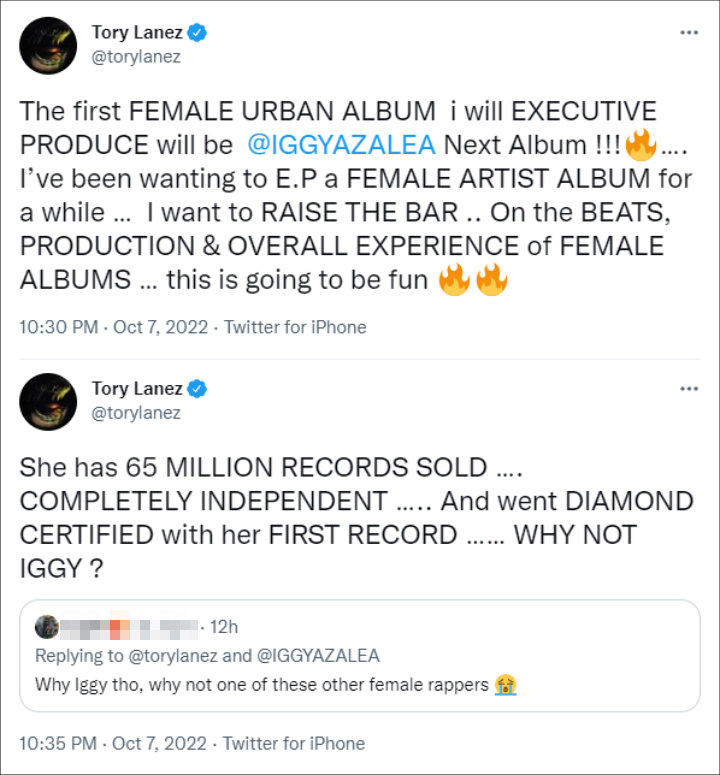 Upon learning of the announcement, one fan wondered, "Why Iggy tho, why not one of these other female rappers [crying emoji]." Tory then replied, "She has 65 MILLION RECORDS SOLD …. COMPLETELY INDEPENDENT ….. And went DIAMOND CERTIFIED with her FIRST RECORD …… WHY NOT IGGY ?"

Tory and Iggy have been rumored to be romantically involved after they were caught hanging out together. In the image which was posted on Gossip of the City's Twitter account on June 30, the two seemed to be deep in conversation while sitting together on a couch with the "Fancy" hitmaker resting her hand on his knee.

Then in July, Tory shared that he enjoyed her cooking. Fueling further the dating rumors, Iggy sent Tory a special gift to celebrate his new album "Sorry 4 What" earlier this month. Tory even called her "baby girl." One day later, the rumored new couple was spotted dancing together in a nightclub.