Making use of his social media platform, the 31-year-old Houston hip-hop star shares a picture of him wearing an arm sling after his left arm was injured.

AceShowbiz - Travis Scott (II) has to take some time off to recover. The "SICKO MODE" hitmaker's long-awaited new album "Utopia" has been expected to be delayed after the rapper injured his arm.

The 31-year-old rapper told his fans that he injured his arm on Sunday, October 2. The "Goosebumps" emcee posted a photo of his arm sling and a picture of him wearing the thing on his left arm via Instagram Story. He simply captioned both images with a face with steam from nose emoji, seemingly hinting that he was upset. 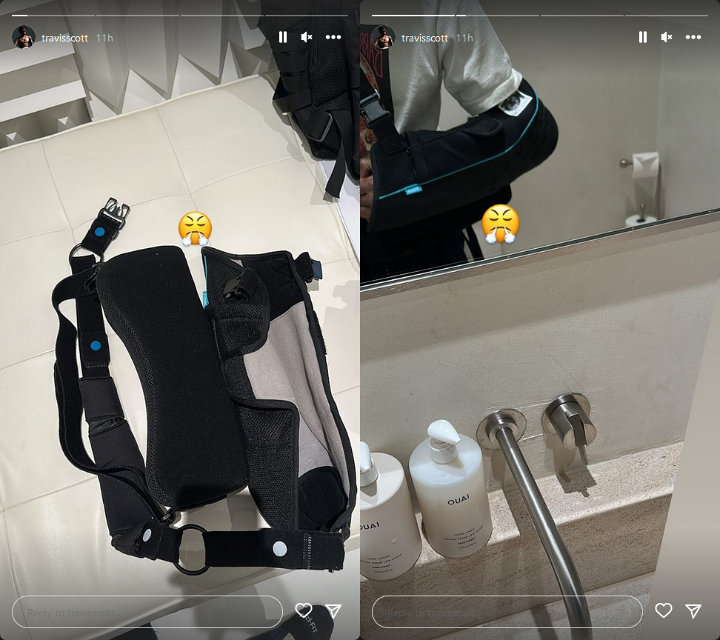 Travis Scott shared photo of him wearing a sling after injuring his arm.

According to reports, Travis is "expected to miss 4-8 weeks in the studio." Sources told ESPN that the Houston hip-hop star's upcoming album "Utopia" is expected to be delayed due to the injury.

Travis has yet to officially announce when fans can expect to hear his long-awaited follow-up to 2018's "Astroworld". However, a photo of the Cactus Jack artist kicking it in the studio with his past collaborator gave hints about what kind of sounds fans will be hearing on "Utopia".

In August, Travis was spotted hanging out in a studio with Pharrell Williams. In an image, which surfaced on social media on August 27, both La Flame and Skateboard P could be seen rocking ear-to-ear smiles near an electronic keyboard.

Then on September 14, a video surfacing online saw a bunch of partygoers dancing to what appeared to be Travis and Pharrell's new collaboration. Though the lyrics were not clear due to the crowd's screams, the song's groove was incredibly catchy.

A few days later, the "Astroworld" artist previewed his upcoming collaborations with Kid Cudi, Future, Lil Uzi Vert and Pharrell during the first night of his "Road to Utopia" experience at Zouk nightclub in Las Vegas. One of the tracks was a collaboration with Kid Cudi, "Out of My Mind", which was first teased two years ago.