The Amazon founder is urged by critics to 'keep quiet' after he slams an associate professor of second language acquisition at Carnegie Mellon University Uju Anya on Twitter.

AceShowbiz - Jeff Bezos is facing intense backlash on social media after weighing in on Queen Elizabeth II's recent passing. The Amazon founder has been slammed by critics after he mocked a university professor who wished the late royal an "excruciating" death.

On Thursday, September 8, an associate professor of second language acquisition at Carnegie Mellon University Uju Anya tweeted, "I heard the chief monarch of a thieving raping genocidal empire is finally dying." Uju added, "May her pain be excruciating."

Jeff then quoted Uju's tweet and wrote, "This is someone supposedly working to make the world better?" The world's third-richest man continued, "I don't think so," before adding, "Wow."

Jeff quickly came under fire from critics pointing to his vast wealth, influence and controversial business practices. "You should probably stay quiet when it comes to critiques of empire + its overlords," tweeted one user. "Cheer up," wrote another, "You've got 30, maybe 40 years to shed your wealth and bend public memory such that children are not celebrating in the streets when the news comes that you've passed."

When another user asked why Uju would wish the Queen dead, the professor wrote, "I'm not wishing her dead. She's dying already." She further elaborated, "I'm wishing her an agonizingly painful death like the one she caused for millions of people."

"If anyone expects me to express anything but disdain for the monarch who supervised a government that sponsored the genocide that massacred and displaced half my family and the consequences of which those alive today are still trying to overcome, you can keep wishing upon a star," Uju reasoned.

Uju, who was born in Nigeria to a Nigerian father and mother from Trinidad and Tobago, later replied to Jeff's latest tweet as writing, "Otoro gba gbue gi." She went on adding, "May everyone you and your merciless greed have harmed in this world remember you as fondly as I remember my colonizers."

Jeff did not immediately respond to Anya's reply, instead posting a separate tweet to memorialize the Queen, writing, "I can think of no one who better personified duty. My deepest condolences to all the Brits mourning her passing today." 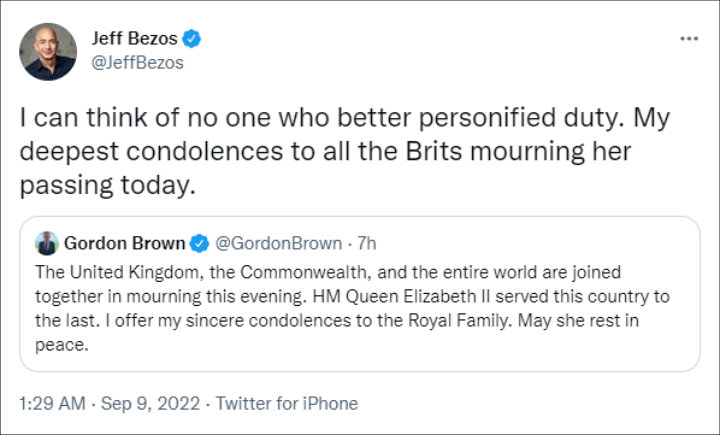 Queen Elizabeth passed away "peacefully" on Thursday afternoon, according to Buckingham Palace. "The Queen died peacefully at Balmoral this afternoon. The King and The Queen Consort will remain at Balmoral this evening and will return to London tomorrow," read a statement on the official royal family website. Her son, Prince Charles, becomes King immediately following her death.

Jeff Bezos Committed to Donating Majority of His $124 Wealth