Making use of his social media platform, the RnB star speaks out about how people 'only invest in the negative stories' about him as the 'whole world is on it' when he gets in trouble.

AceShowbiz - Chris Brown wants to get noticed for his music, instead of troubles he's in. A little over a week after releasing his album "Breezy", the RnB star took to social media to express his feelings over the lack of support for his latest effort.

On Sunday, July 3, the 33-year-old crooner wrote via Instagram Story, "JULY 8th breezy deluxe album. Not that is matters." He continued, "SEEMS LIKE YALL ONLY INVEST IN THE NEGATIVE STORIES ABOUT ME."

"CHRIS GETS IN TROUBLE (THE WHOLE WORLD IS ON it)," Chris went on fuming, before pointing out, "Chris drops album [a bunch of cricket emojis]." In a follow-up Story, he added, "I'm back on my gangsta s**t. It's BRACKIN at all Times." 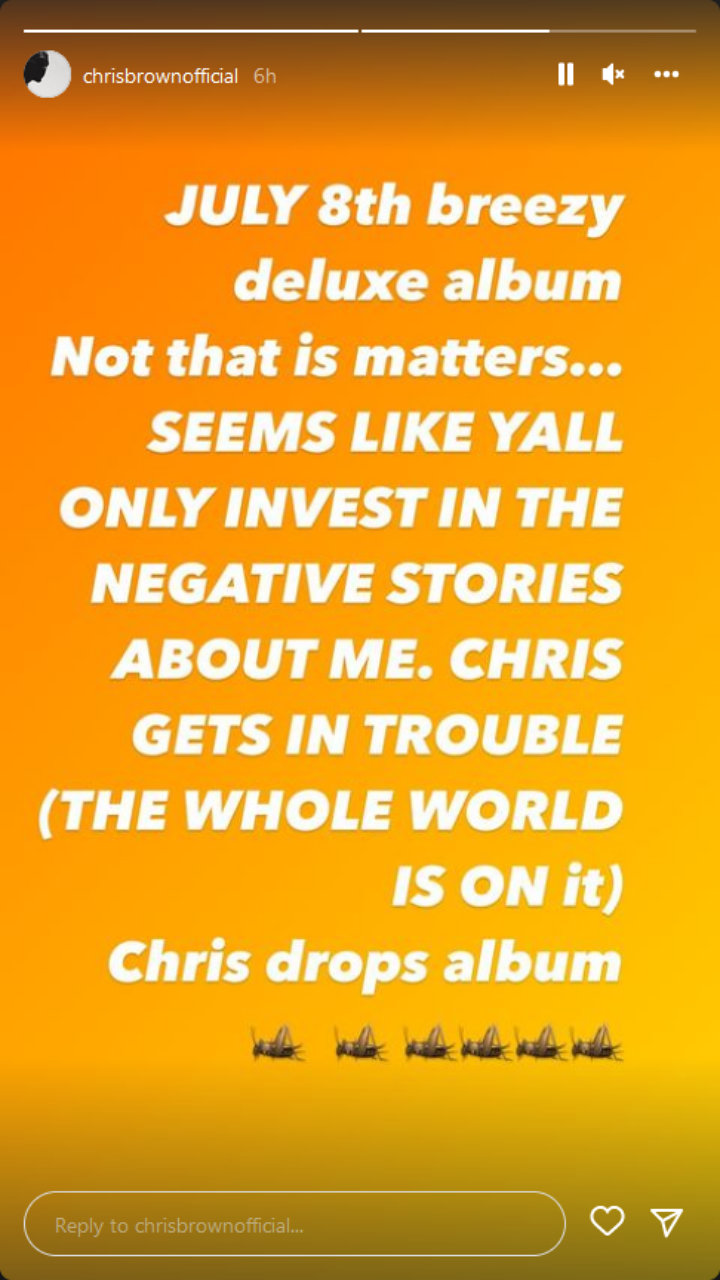 Chris Brown spoke out about the lack of support for his new album 'Breezy'.

The project, which was announced nearly two years ago, marked Chris' first solo effort since 2019's "Indigo". Since then, the "With You" hitmaker reportedly recorded hundreds of tracks for the project before narrowing it down to the final 24.

Chris spoke about the process during a recent interview with Big Boy, explaining his intention to give listeners a variety of sounds. "I be having so many songs. I think for this actual project, I had almost 250 songs," he said.

"I was like, 'Yeah, we gotta scale it down and figure out what we gonna do.' Too many of the songs sound in the same frequency," Chris further explained. "It's like a show. You got the beginning, the climax, and then the end."

Chris went on saying that he "[wants] to give [his] audience at least two or three of the same and not release a whole album where every song sounds the same." Of the features he had on the album, he said, "The features that I did have, they're people that I have a natural, genuine relationship with and people that I feel are very talented."