Lil Duval Under Fire Over Homophobic Remarks About 'P-Valley'

The rapper earns backlash for his comments about an episode featuring a sex scene on the Starz show, stating tat 'we need a super gay advisory' for the episode.

In a direct response to Duval's tweet, Polk hit back at the musician who demanded "a super gay advisory" for the episode. "As a writer and producer of P Valley, specifically a writer of this episode, I encourage you to step away from Chucalissa," Polk wrote on Thursday, June 30. "This show is not for you. Go watch something else. Cuz the gay ain't goin' nowhere."

In a separate tweet, Polk added, "I'm kidding, of course. In all seriousness, if you find the show too uncomfortable to watch, you're welcome to change the channel and watch something else. But why feel the need to come online and spew your homophobic nonsense? We don't care!"

In his tweet, Duval said, "Yea p valley lost me. They need a super gay advisory on movies like they got for everything else. Cuz That's a lot to see if u not use to it." 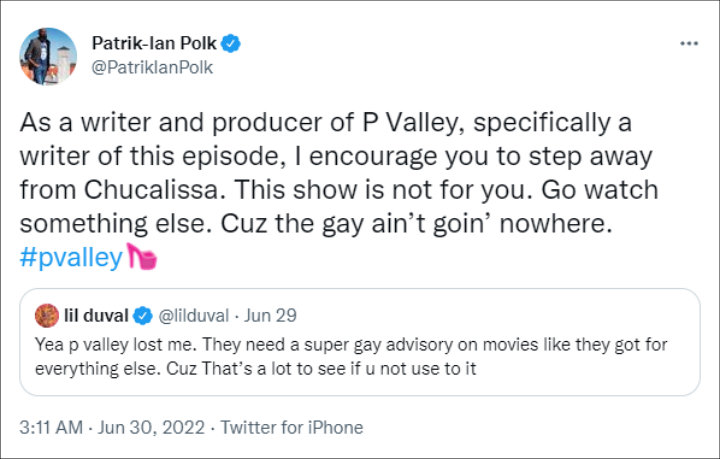 His tweet earned mixed responses from Twitter users. "It has a sexual advisory. It doesn't need to explain more than that. If you feel like you need to chose the type of sex you see on prime tv then yes, you might be homophobic. You either choose to see sex or not. But the advisory is already there," one person replied.

Someone else, meanwhile, echoed Duval's sentiment. "I just feel like that scene ain't have to go there! That built a narrative that two black brothers can't fellowship and share their fears and pains and tears and not be gay. TOO ME! It piss me off!" the person said.

Lil Duval Under Fire for His Comment on Lupita Nyong'o's Body