Taking action after the ruling, the 'Truth Hurts' hitmaker vows to donate $500K of her upcoming tour proceeds to Planned Parenthood and the National Network of Abortion Funds (NNAF).

AceShowbiz - Lizzo is taking real action after Roe v. Wade ruling. The "Truth Hurts" hitmaker has teamed up with Live Nation to donate $1 million to abortion organizations after the United States Supreme Court ruled to overturn Roe v. Wade, the 1973 case that protected a woman's federal right to have an abortion.

Making use of her Instagram Story on Friday, June 24, the "Grrrls" songstress announced, "I'm pledging $500K from my upcoming tour to Planned Parenthood and Abortion Rights." She added, "@livenation agreed to match -- to make it 1 MILLION dollars."

"The most important thing is action & loud voices," Lizzo further stated. "@plannedparenthood @abortionfunds & organizations like them -- will need funding to continue offering services to people who are most harmed by this ban."

In a follow-up Story, Lizzo continued, "Black women & women of color have historically had disproportionately less access to family planning resources -- this is a great loss but not a new one." The 34-year-old Detroit, Minnesota native later concluded her post as saying, "Go to lizzolovesyou.com to donate, sign the Bans Off My Body petition and sign up to volunteer." 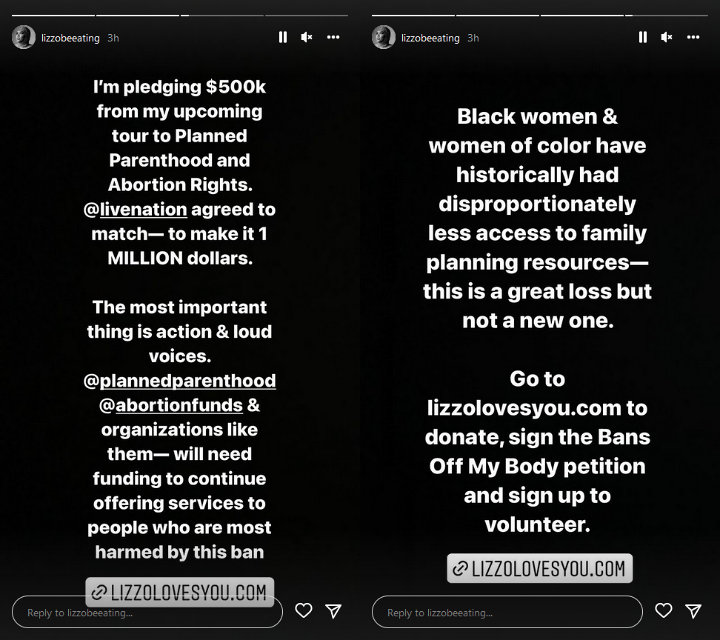 Planned Parenthood is a nonprofit organization that provides reproductive health care in the United States and globally. Meanwhile, the National Network of Abortion Funds builds power with members to remove financial and logistical barriers to abortion access by centering people who have abortions and organizing at the intersections of racial, economic and reproductive justice.

In addition to Lizzo, Michelle Obama, Taylor Swift and Halle Berry were among the army of outraged celebrities venting rage at the Supreme Court's scrapping of the constitutional right to abortion.

In her statement, the wife of former POTUS Barack Obama said, "I am heartbroken that we may now be destined to learn the painful lessons of a time before Roe was made law of the land - a time when women risked losing their lives getting illegal abortions."

Taylor, in the meantime, responded to the former First Lady's statement by saying the law change has left her filled with horror. The pop star added, "I'm absolutely terrified that this is where we are - that after so many decades of people fighting for women's rights to their own bodies, today's decision has stripped us of that."

Meanwhile, Halle branded the overturning "bulls**t" and a "war on women." The "Catwoman" star fumed, "I'm outraged! What the supreme court has done is BULLS**T. Something has to be done! Guns have more rights than women. Stop this war on women and keep your laws off of our bodies. We have to band together and NOT accept this! We can't just post about it, we must DO SOMETHING about it."

On Friday, the Supreme Court voted to overturn Roe v. Wade and Planned Parenthood v. Casey in Dobbs v. Jackson Women's Health Organization by a vote of 5-4. Abortion was automatically outlawed in 18 U.S. states as soon as Roe v. Wade was overturned, thanks to specially-devised "trigger laws" and historic bans that were automatically reenacted after Friday's ruling.

Artist of the Week: Lizzo

Lizzo Dishes on Her Admiration for Beyonce