The former Disney darling announces that they're releasing a new single after fans speculated that 'Skin of My Teeth' would be the lead single of their eighth studio album.

AceShowbiz - Demi Lovato has announced their new single "Skin of My Teeth". Despite claiming they were leaving music behind, the "Sorry Not Sorry" hitmaker confirmed social media speculation that they will be releasing their eighth studio album's lead single, which shares its name with the record.

After a fan wrote on Twitter, "SKIN OF MY TEETH IS THE LEAD ACCORDING TO THE STREETS," that prompted a reply from another that asked, "What street," which caught the attention of the 29-year-old pop star, who joined in, writing, "My street." 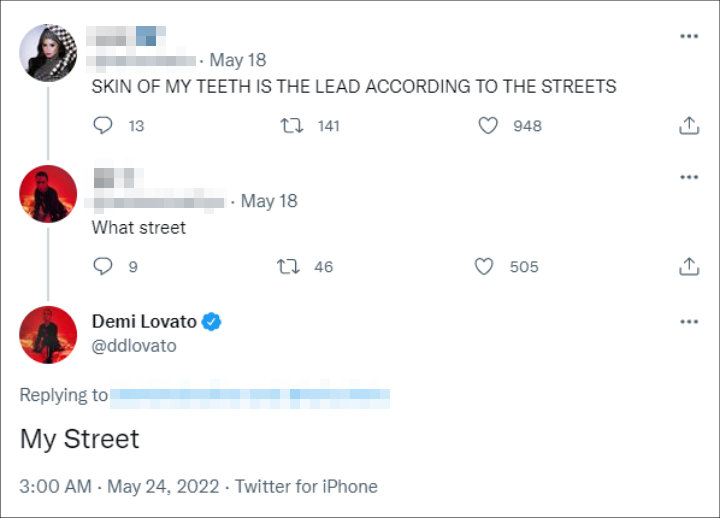 Demi previously gushed about being "so proud" of the new music they were creating, claiming it was their "absolute best yet." They wrote, "Getting emotional listening to my new album because I'm so proud of it. It's my absolute best yet and so representative of me, where I started and who I am today."

Demi continued, "Yesterday I posted a song called 'Happy Ending' and even tho I wrote this in an incredibly dark place, I'm so grateful I'm no longer in that low, cold and lonely place... I'm sure that no matter what happens in my life...my happy ending is never having to fall into old habits again."

The new release will be the "Heart Attack" hitmaker's latest offering since 2021's "Dancing With the Devil... the Art of Starting Over". In January, Demi posted a photo of her "funeral for my pop music," with them showing two fingers to the camera.

Later, they said, "It's a new era reminiscent of my first era. I'm ever-evolving, ever-changing. I'd like to put the rest of my music behind me and start fresh in this new era for this next album - but I do that every album cycle."