The former 'Keeping Up with the Kardashians' star makes fun of her single status when commenting on a photo of her at her sister and Travis' Italian wedding.

AceShowbiz - Khloe Kardashian has no problem making a joke about her dating life. The "Keeping Up with the Kardashians" alum poked fun at her single status after she was photographed alone at Kourtney Kardashian and Travis Barker's lavish wedding in Italy.

On Monday, May 23, the Good American founder responded to a fan's tweet which included a photo of her at her sister's nuptials. In the snap, the 37-year-old was seen sipping on a glass of wine alone while looking at Megan Fox and Machine Gun Kelly taking a photo together.

Alongside the picture, the fan jokingly penned, "my love life summed up in one photo." Instead of getting mad by the caption, Khloe joined in the fun by replying, "Same girl lol it's a vibe though." 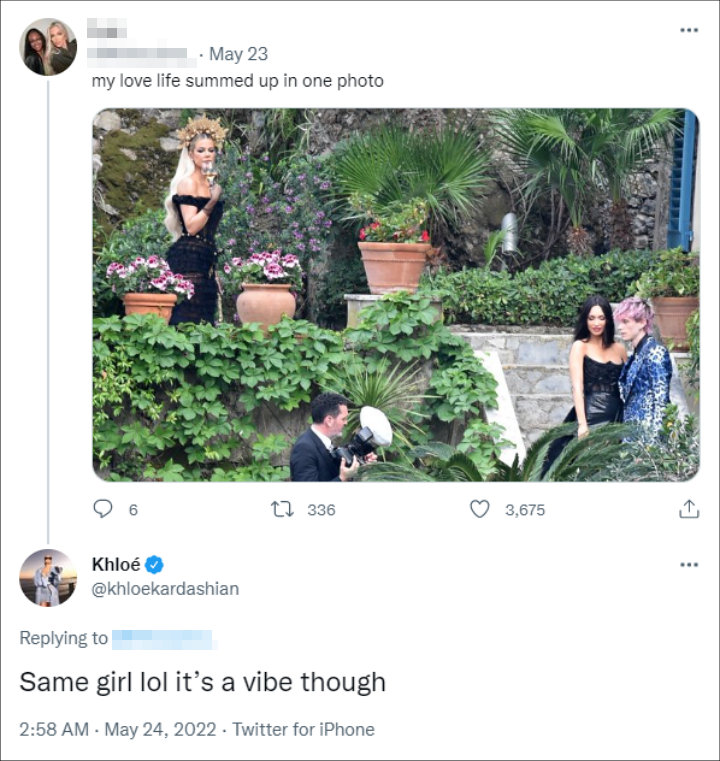 Khloe attended Kourtney and Travis' wedding along with her family, including mom Kris Jenner and sisters Kim Kardashian, Kylie Jenner and Kendall Jenner. While her siblings brought some of their kids, the mother of one left her 4-year-old daughter True in Los Angeles with her father, Tristan Thompson.

Khloe and Tristan dated on-and-off before finally calling it quits for good last December. The pair split once again after the NBA athlete admitted to fathering a baby with personal trainer Maralee Nichols.

"Today, paternity test results reveal that I fathered a child with Maralee Nichols," Tristan penned on Instagram Story at that time. "I take full responsibility for my actions. Now that paternity has been established I look forward to amicably raising our son."