Making use of her social media platform, the 'Dreamcatcher' actress says that her 'love is much bigger' than her relationship after she rekindles her relationship with the 'Sure Thing' crooner.

AceShowbiz - Miguel's wife Nazanin Mandi has seemingly opened up more about her feelings after they rekindled their romance. The "Dreamcatcher" actress shared a post on social media about healing following "turbulent times."

Taking to her Instagram Story on Sunday, March 20, the 35-year-old actress shared a quote that read, "Love is much bigger than relationships. Love is the way you heal yourself, the kindness you give to others, the gentleness you give yourself during turbulent times." The wise words continued, "[Love is] the space you hold for close friends, the intention you use to live in the present, and the energy that changes the world."

"It's every moment that elevates the human experience and all the small things that make life shine," the note concluded. In a separate Story, Nazanin added a quote about meeting "rock bottom." The post read, "Sometimes you need to meet rock bottom to find out just how strong you are." 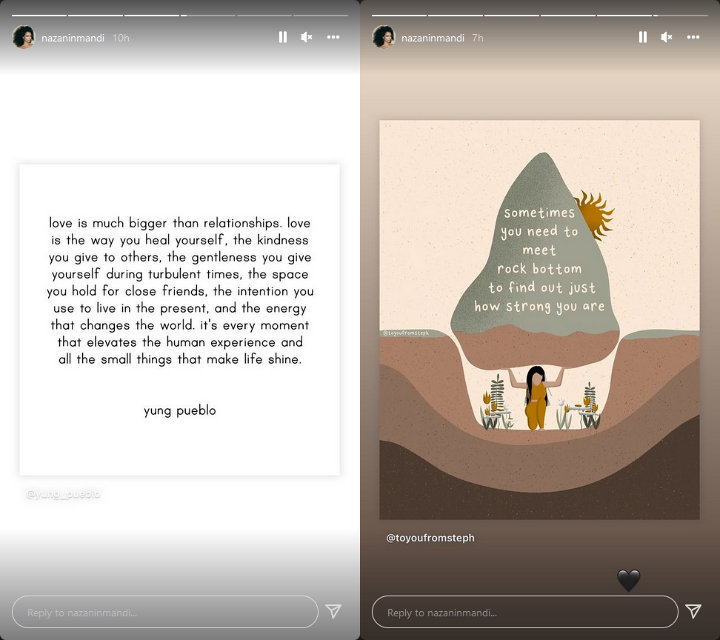 Nazanin's post about love, healing and getting stronger after hitting "rock bottom" came hours after she and Miguel showed some PDA during an interview with The Shade Room at the Smokin' Grooves Festival at Los Angeles State Historic Park. When Miguel was asked if he's still married to Nazanin, the "Sure Thing" crooner answered, "Yes!" while looking around for her. After he found his wife, he said to her, "Baby! Say hi to the people. We're happy."

Miguel and Nazanin first confirmed that they're back together with loved-up photos shared on their Instagram pages last month, shortly after they're spotted vacationing together. "Love heals. Proud of us [fire and red heart emoji]. -Pimentel's," the "Sky Walker" singer captioned his February 15 post.

Nazanin, in the meantime, shared a similar sentiment in her caption as saying, "… heal the root so the tree is stable. I'm so proud of us." "The Platinum Life" alum went on to add, "The Pimentel's xoxo."

Miguel and Nazanin announced their split last September. "After 17 years together, Miguel and Nazanin Mandi have decided to separate and have been for some time now," the couple said in a joint statement at the time, "The couple both wish each other well."