The filming on the series, which will explore a major comic book crossover event, has reportedly nearly finished with Samuel L. Jackson previously revealing that the production began in October 2021.

AceShowbiz - Nick Fury is returning to the Marvel Cinematic Universe. New photos from the set of Disney+'s "Secret Invasion" feature Samuel L. Jackson filming as the character, and fans might get surprised by his new brand look.

In the pictures circulating online, the actor was seen walking down the street in character while donning a civilian attire. Fury, meanwhile, surprisingly opted out his signature eye-patch. The former director of S.H.I.E.L.D. was also seen sporting a rather bushy beard. 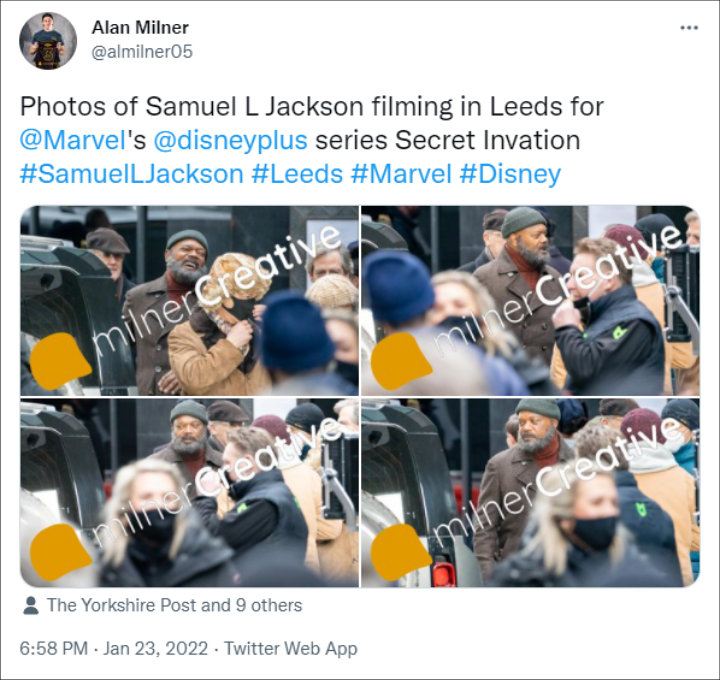 The pictures, unfortunately, gave little to no detail to the plot of the upcoming TV series. Despite dressing as a civilian, fans doubted that Fury will be shown solely living a civilian life.

Fury's new look quickly grabbed fans' attention. "Mans got the beard & no more patch. I already know Secret Invasion bout to be [fire emoji]," one fan tweeted. Another fan, meanwhile, noticed that Ben Mendelsohn joined Samuel on the set, writing, "It's been brought up that it's Ben Mendelsohn in the top corner of the first pic, too! Two celebs for the price of one!"

Prior to this, Fury's new look was teased on Disney+ Day in 2021 in a quick shot during a montage of shows to come. The new "Secret Invasion" set photos, however, served the first look at the entire ensemble of Fury.

As for now, details regarding plot and cast of "Secret Invasion" are still scarce. It's also unknown how exactly the TV series will adapt the major comic book crossover event of the same name.

Helmed by writer Brian Michael Bendis and artists Leinil Artist Yu, Mark Morales and Laura Martin, "Secret Invasion" was published in 2008. It explored the revelation that many of Earth's superheroes and figures had been replaced by the shape-shifting Skrulls, as part of a larger invasion following the prophesied destruction of the Skrull homeworld.

Joining Samuel on the series is Cobie Smulders as she will be reprising her role as Agent Maria Hill, who was revealed to be a Skrull in "Spider-Man: Far From Home". Ben is also among the cast as the Skrull Talos in "Captain Marvel" and "Far From Home".

According to recent reports, filming on "Secret Invasion" has nearly finished. Samuel himself previously revealed that the production on the series began in October 2021. Disney+ has yet to announce the premiere date for "Secret Invasion", but the new Marvel series is believed to be scheduled to arrive some time this year.