The 'Cruel Intentions' actor gets help from his pal, Matt Sinn, after sending fans into frenzy with a picture that sees the two posing in front of a fireplace when celebrating the special day.

AceShowbiz - Ryan Phillippe has sparked gay rumors after sharing a cozy Christmas photo with his friend Matt Sinn. However, the "Big Sky" actor's pal was quick to offer a clarification to shut down the speculations.

The 47-year-old actor took to his Instagram page on Saturday, December 25 to post a photo that saw him posing in front of a fireplace with Matt. In the caption, the two-time Screen Actors Guild Award winner wrote, "Merry Christmas from our house to yours!"

In the comment section, many social media users began speculating that Ryan quietly came out as a gay. "Wait he came out? I am confused," one Instagram user wondered if the post was meant to announce that the two are an item. "Making some news here," another chimed in, while a third commented, "Wait. Not judging but honestly curious. Is this a homosexual relationship?"

The comments continued with a slew of congratulatory messages for the pair from fans supportive of the potential relationship. "So happy you're living your truth!" one fan wrote, adding a couple of rainbow emojis. A separate social media user added, "Love the vibe of this post," while another one penned, "Came here for the comments bc I'm wondering the same thing you all are [rainbow emoji]."

After causing confusion, Ryan's friend Matt took to his Instagram Story on Sunday to clarify that Ryan "didn't come out." In an attempt to make everything clear, Matt reposted a snap of their girlfriends Stephanie Lauren and Bailey Dodge. "Here are the girlfriends," he wrote over the picture that saw Stephanie and Bailey copying their boyfriends' pose. 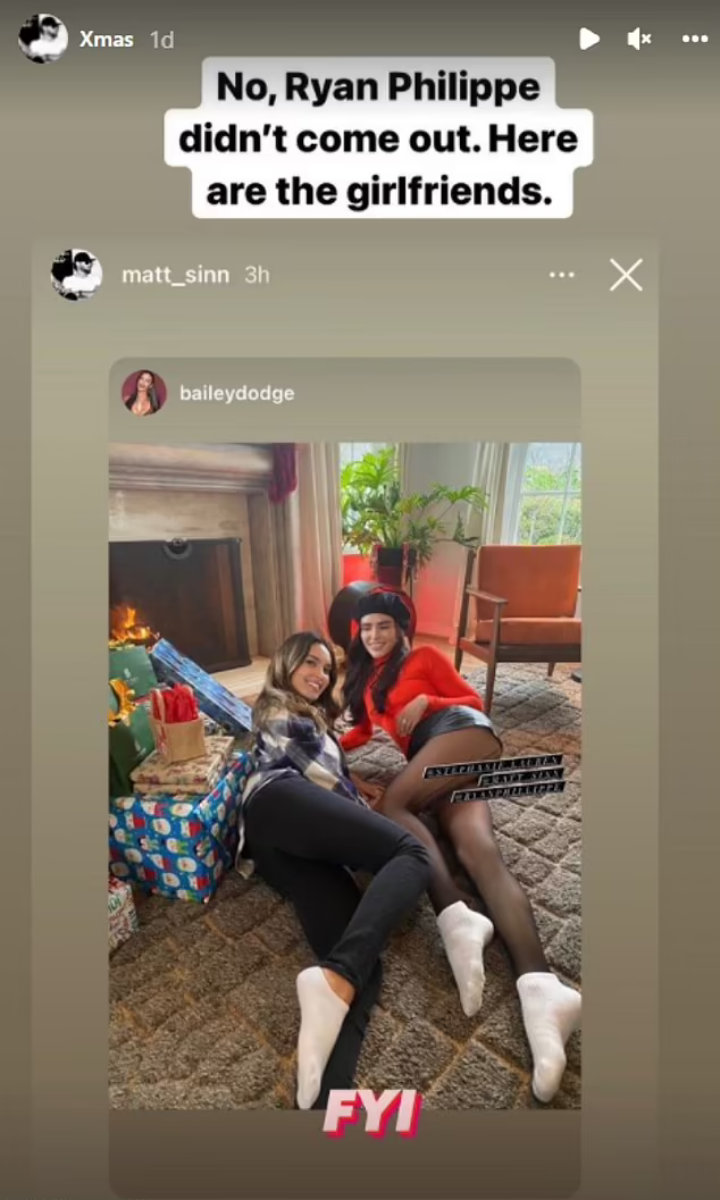 It's unclear when Ryan began dating Bailey, who is a model. Ryan was previously married to actress Reese Witherspoon for eight years before divorcing in 2007. The "Cruel Intentions" star shares his 21-year-old daughter Ava and 18-year-old son Deacon with the "Big Little Lies" alum. The actor is also a father of 10-year-old daughter Kai with his ex-girlfriend Alexis Knapp.