The 57-year-old former 'The Real Housewives of Beverly Hills' star sparks chatter on the Internet after a picture of her at the event found its way out online.

AceShowbiz - Kim Richards looked unrecognizable while attending niece Portia Umansky's bat mitzvah. The former "The Real Housewives of Beverly Hills" star sparked chatter on the Internet after a picture of her at the event found its way out online on Monday, October 4.

Shared by @queensofbravo social media account, the picture saw the star posing with a friend and smiling for the camera. For the occasion, Kim opted for a green and a belted ensemble. As for her hair, she let her long, blonde hair drape over her shoulders. 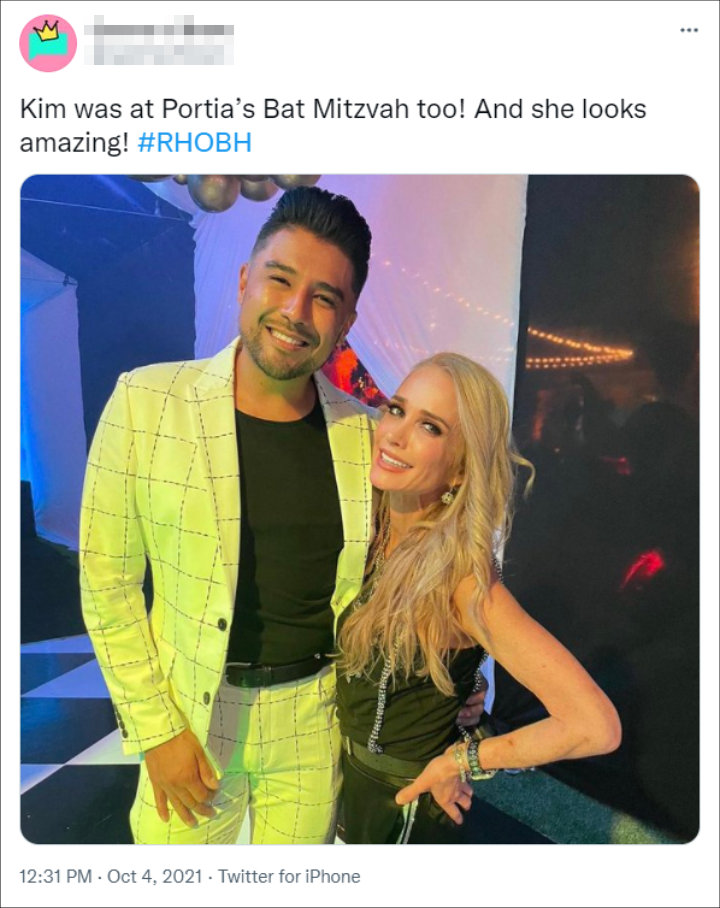 While the 57-year-old star looked amazing as always, it was her younger look that got people talking. "Holy s**t!! What has she had done? She looks at least 15-20 years younger," one person commented on her new look. "[E]ither she's had sone amazing work done or that's a great filter!!" another person added.

"I'll have what she's having lol she looks great!" someone else exlaimed. Meanwhile, a user admitted to not being able to "recognize" Kim at first. Another person asked Bravo to "give queen kim her diamond back asap."

While there is no word if the network is planning to bring Kim back for the next episode of "RHOBH", the current season featured Kim's sister Kathy Hilton in a "friend" capacity. Kim was fired from the show following back-to-back arrests.

Back in 2015, she was arrested twice and become "homeless" for a brief time following a rehab stint. Later in 2018, Kim had to pay $266,000 for a separate attack that happened in 2015 with her dog, Kingsley. She was ordered to pay $5,000 for "refusing to pay for services" of ghostwriter named Alison Kingsley Baker.

The "Escape to Witch Mountain" alum recently was reportedly to have money issues as she allegedly owes nearly $100,000 in unpaid taxes to the State Of California.

Nick Cannon Says He Wants to Practice Celibacy After Birth of Baby No. 7