The detective Elliot Stabler and Olivia Benson depicters on the hit crime drama series tease fans with a picture that shows the two nearly kissing each other on set.

On Saturday, August 21, Christopher took to his Twitter account to share a sweet pic with his co-star Mariska. In the snapshot, the two, who co-starred on the series for more than a decade, looked deep into each other's eyes, as they embraced each other so close that their lips were almost touching. "#Rehearsing what @Mariska ?" the 60-year-old actor captioned his post. For her part, the 57-year-old retweeted Chris’ post and wrote, "Are you blushing? it's getting hot in here," along with a fire emoji.

His Twitter post was actually a response to a tweet from a "Law & Order" fan, named Maria. In her post, the fan shared pics that saw Christopher and Mariska, seemingly on set while portraying their iconic characters, in a passionate kissing scene. 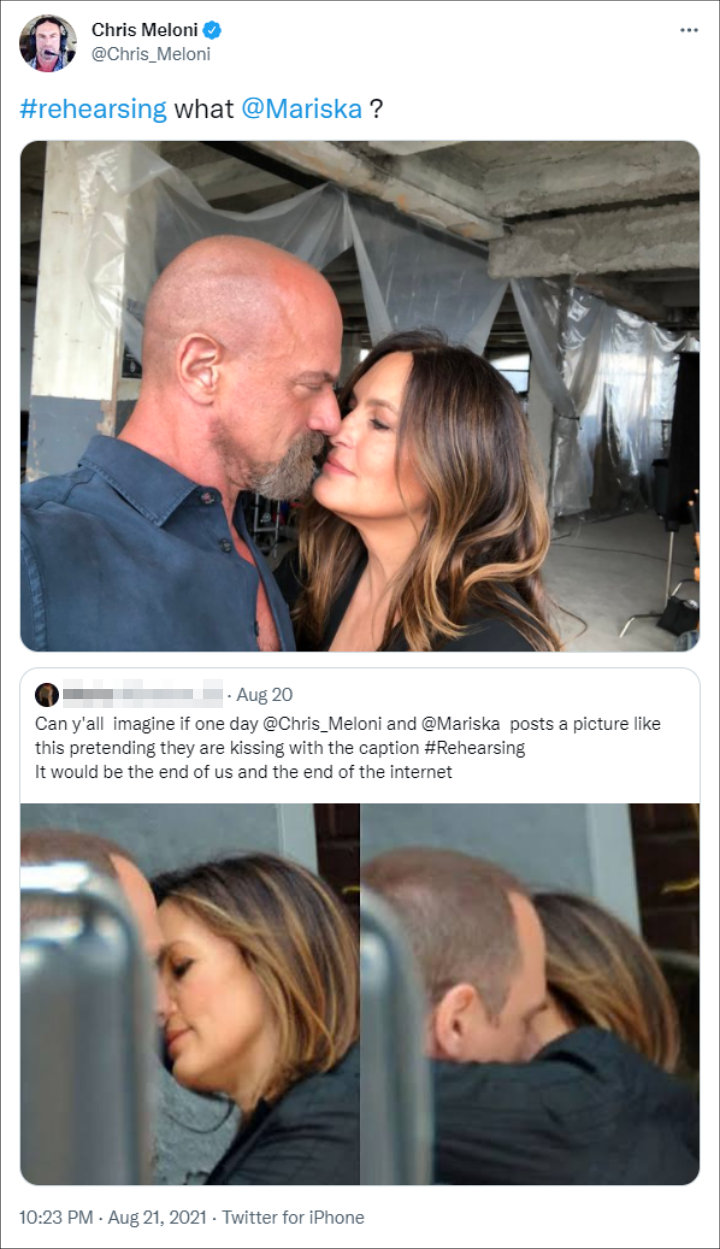 "Can y'all imagine if one day @Chris_Meloni and @Mariska posts a picture like this pretending they are kissing with the caption #Rehearsing," the fan penned. "It would be the end of us and the end of the internet."

Many fans were quick to rave over the PDA-packed images, wishing that Christopher and Mariska's characters end up together. One fan gushed, "This warms my heart and makes me smile," to which Christopher replied, "Me too. I loved #HaroldAndKumar #youcancallmeFreaksow #thedevilseverywhere."

"I hope you have a huge supply of crazy glue because I think you just broke the internet again," another commented on Chris' tweet, while a Twitter user chimed in, "You are abusing your power over us!! I am dying here! Hopefully you are rehearsing for a real scene that will literally send us to the hospital! Oh! How I love you guys!" A separate fan went on saying, "OMG. Let this happen. I have waited years. XX The episode when he held her tight after his wife delivered their son after a car crash still gives me chills. Love them. Xx."