The troll in question leaves his/her offensive comment after 'The Talk' co-host posts a photo of herself that is inspired by the '80s rom-com 'Can't Buy Me Love'.

AceShowbiz - Amanda Kloots is not here for any negative comments about her love life. After an online troll said she's dating too soon in the wake of her husband Nick Cordero's death, "The Talk" co-host set aside time to call out the "rude" critic.

On Friday, July 23, the 39-year-old shared a picture of herself that was inspired by the '80s rom-com "Can't Buy Me Love". While many of her followers gushed over her cute photo, one person in particular left a critical comment that read, "Dating already Wow that was fast."

Noticing the remark, Amanda screenshot the comment and shared it on her Instagram Story. Alongside the snap, she raged, "How dare you judge anyone especially someone going through this process."

"I will address this soon guys I promise. There's too much to say and too much that widows deal with to not talk about it," the TV personality further fumed. "Until then I will call out anyone who is rude enough to comment like this." 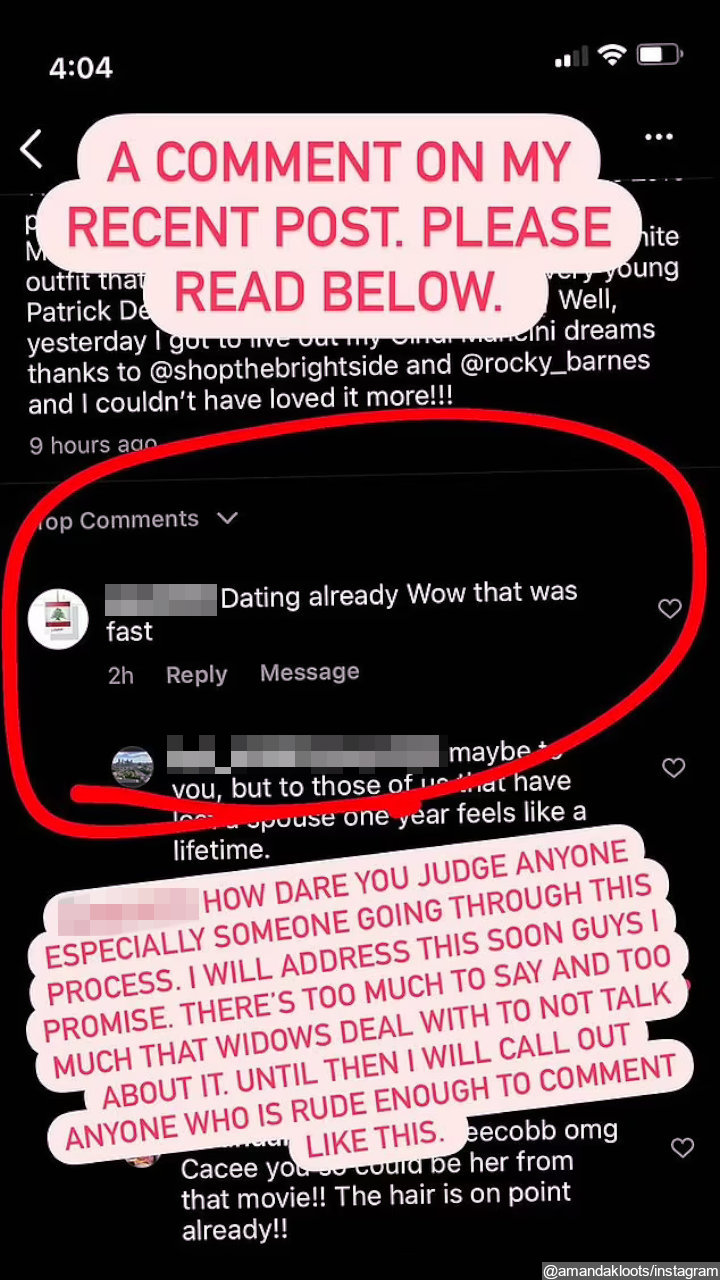 Amanda Kloots blasted a troll criticizing her for dating too soon after Nick Cordero's death.

Amanda later opened up about dating after the loss of her husband on Sunday, July 25 via Instagram Live. "We will never ever not love our person. We will never go on a date without missing our person. There will never be a day where we don't grieve that person. That will not change," she explained.

"Even if I found amazing love again and I am beyond happy, I think everyday I will miss Nick," she further stressed. "To be honest, me taking the wedding ring off before the date makes me feel like I'm cheating on my husband in a weird way, which doesn't make any sense because I'm totally not."

Amanda's husband Nick passed away in July 2020 following a months-long battle with complications caused by COVID-19. Earlier this month, the fitness guru told her "The Talk" co-hosts that she started seeing someone new.

"Both of my husbands, I met doing Broadway shows. We became friends first, then we got married. Obviously with Nick, we had a child," she shared on July 23. "I've never actually had to date. I just started dating again and it is so crazy to be dating for the first time at 39 years old. And it's quite terrifying and really out of your element, and it's just hard. It is hard."