Titled 'Songs From the Back of the Station Wagon', the set was created for online radio station Boss Radio 66 and includes Roy Tann's 'Hot Rod Queen' and The Chartbusters' 'She's the One'.

AceShowbiz - Tom Hanks has curated a new hour-long DJ set for an independent radio station to celebrate his 65th birthday.

The set, titled "Songs From the Back of the Station Wagon", was created for online radio station Boss Radio 66, which specializes in playing obscure American rock and roll, surf rock and soul music from the 1950s and 1960s. 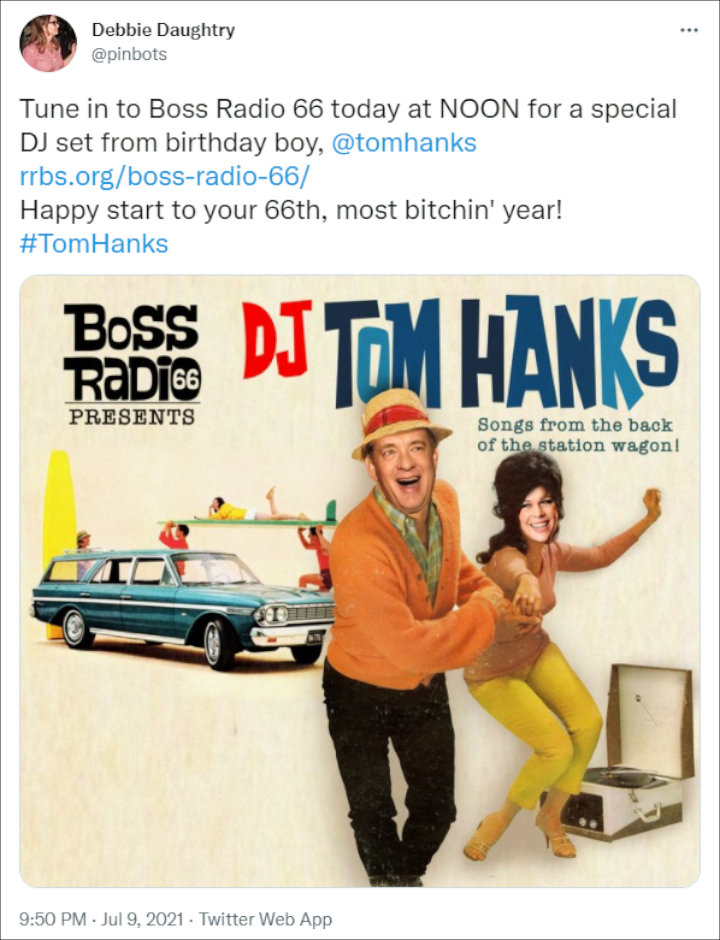 The set includes songs like "Hot Rod Queen" by Roy Tann from 1957 and "She's the One" by The Chartbusters.

The accompanying art features the actor and his wife Rita Wilson as a swinging '60s couple grooving in front of a record player with a station wagon full of surfers in the background.

The actor's love of music from the era was showcased in his directorial debut, the 1996 comedy "That Thing You Do!" - about a fictional 1960s band, called the Wonders, who are managed by Hanks' character.

Hanks' move came weeks after he and wife Rita Wilson were alleged to have cut off son Chet Hanks financially. Kiana Parker, the "Empire" star's ex-girlfriend, spilled the beans to Radar as saying, "He was just dealing with his mom and dad cutting him off because he started drinking and smoking weed again, and that wasn't in their rule book to support him. So they cut him off."

Tom Hanks Shouts at Fans After They Bump Into His Wife Rita Wilson: 'Back the F**k Off!'

Couple Praises Tom Hanks for Officiating Their Wedding: 'There's a Level of Comfort'