The production team behind the Netflix drama itself also pays tribute to the late royal in a statement in which they say that they 'are deeply saddened to hear of the death of The Duke of Edinburgh.'

AceShowbiz - "The Crown" stars Tobias Menzies and Matt Smith, who portray Prince Philip on the hit Netflix drama, have paid tribute to the British royal following his passing on Friday morning, April 9. Smith, who played the Duke of Edinburgh in the first two seasons of "The Crown", shared his condolence in a statement to E! News.

"I'd like to offer my condolences to Her Majesty the Queen and the Royal Family," the statement read. "Prince Philip was the man. And he knew it. 99 and out, but what an innings. And what style. Thank you for your service old chap--it won't be the same without you."

Menzies also reacted to Prince Philip's death by recognizing his service to the United Kingdom. "If I know anything about the Duke of Edinburgh I'm fairly sure he wouldn't want an actor who portrayed him on TV giving their opinion on his life, so I'll leave it to Shakespeare," so the actor wrote on his Twitter account on Friday.

" 'O good old man! how well in thee appears. The constant service of the antique world....,' " so he quoted Shakespeare's "Orlando". Concluding his post, Menzies, who played the older version of Smith's Prince Philip, added, "RIP." 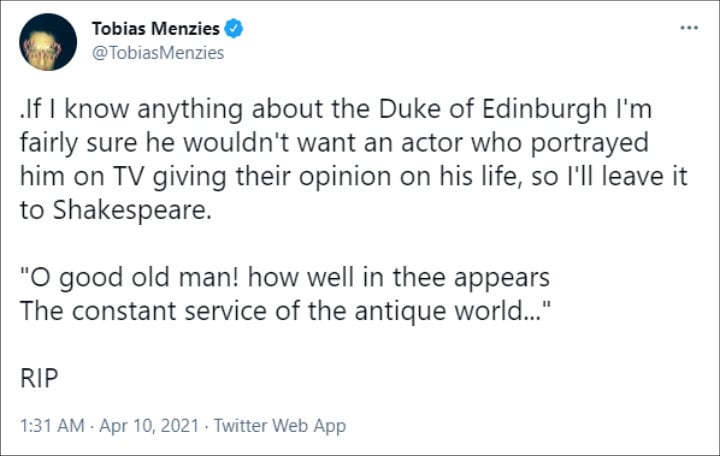 "The Crown" itself also paid tribute to the late royal in a statement. "Netflix, Left Bank Pictures, Sony Pictures Television and the production team on The Crown are deeply saddened to hear of the death of The Duke of Edinburgh," the statement read. "Our thoughts are with the royal family at this sad time."

In the upcoming season of the award-winning series, Jonathan Pryce is set to take over the role of Queen Elizabeth's husband.

Buckingham Palace confirmed the Duke of Edinburgh's passing on Friday, April 9. "It is with deep sorrow that Her Majesty The Queen has announced the death of her beloved husband, His Royal Highness The Prince Philip, Duke of Edinburgh," a statement read. The announcement also mentioned that "His Royal Highness passed away peacefully this morning at Windsor Castle." He was 99.