After series of delays due to coronavirus, the film that is scheduled to be released on March 4, 2022, finally completed its production with director Matt Reeves sharing the news on Twitter.

AceShowbiz - Get ready to see Robert Pattinson on black fitted costume. After series of production delays due to pandemic, filming on "The Batman" has eventually finished. The good news was shared by Matt Reeves on his Twitter page. 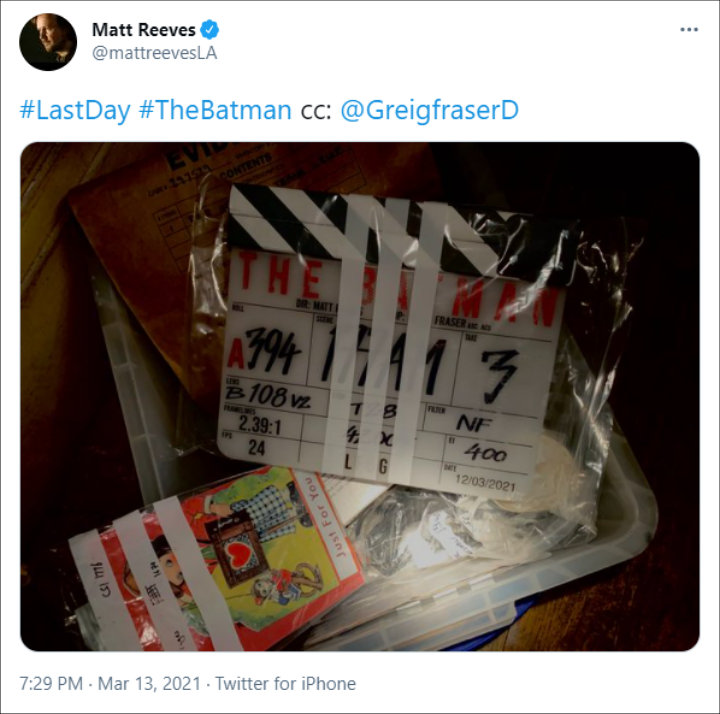 Matt Reeves announced 'The Batman' filming has wrapped up.

"YESSS WE LOVE TO SEE IT! NOW BRING ON BATTINSON," one Twitter comment read. Another then added, "I believe in Matt Reeves and he has the creative vision and direction to truly bring life to this universe. With Robert Pattinson, the cast, and everyone who has dedicated their time to this film, I truly believe this is going to be a SUPERB Batman film!"

Besides Matt, Jeffrey Wright, who took the role of Jim Gordon, also posted on his Instagram page, "Jim Gordon Gordon out. ...for now. One year exactly after the shutdown. Some ride." Jeffrey added the artistry feel by sharing portrait painting by @arvarvart, calling it "sweet piece."

The filming on the upcoming Batman big-screen project was suspended for six months in March last year, amidst the global pandemic as most part of the world was locked down. Once the filming resumed, it was once again postponed because Robert was reportedly positive for the virus in September.

And it didn't stop there. In November last year, the production must be halted once more after a stuntman was forced to isolate along with his bubble due to coronavirus.

"The Batman" is scheduled to be released on March 4, 2022. Besides featuring Robert Pattinson and Jeffrey Wright, the movie also stars Zoe Kravitz as Selina Kyle or Catwoman, Colin Farrell as Oswald "Oz" Cobblepot or Penguin, Paul Dano as Edward Nashton or Riddler, John Turturro as a Gotham crime lord, and Peter Sarsgaard as Gil Colson, Gotham's district attorney.

Winona Ryder Teams Up With Eli Horowitz for 'The Cow'