The 'Black Madonna' raptress announces she has called it quits with the 34-year-old artist because he was 'too insecure,' but she's keeping the menorah ring.

AceShowbiz - Azealia Banks seemingly has to wait a little longer to become a bride. Just a week after making public her engagement to Ryder Ripps, the rapper has announced that she called it quits with the artist.

Sharing an update on her love life via her Instagram Story, the hip-hop star hinted that she pulled the plug on their relationship because he couldn't keep up with her. "Lol, I just dumped @ryder_ripps," she casually broke the news on Monday, March 1, explaining, "He's too insecure for the wildly creative she-wolf in me." 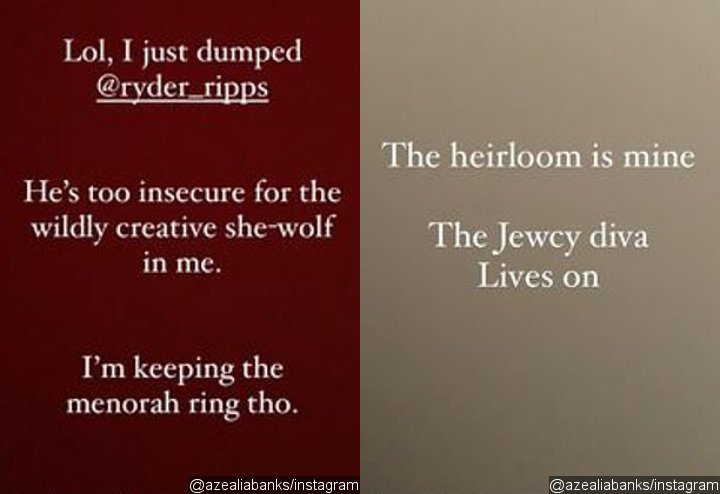 Azealia Banks announced she called off her engagement to Ryder Ripps.
See also...

Azealia announced on February 22 that she got engaged to Ryder by posting a picture of her ring which featured religious Jewish symbol menorah. She captioned it, "I just got engaged kunts. I'm crying .... I'm Jewish now. MAZEL TOV B***HES! WE IN HERE.... YERRRRRRR."

When some people took issue with her claim that she's "Jewish now,", the "Anna Wintour" spitter was quick to hit back. "The [hoteps] not understanding that Judaism is a religion and once again forgetting that there are nations of black Jews," she responded in a now-deleted tweet. "Sometimes black Twitter has some seriously uneducated and ignorant takes.... but go off *sis*."

It's unclear how long Azealia and Ryder had been dating prior to their short engagement, but she hinted at their romance in February 8 posts, in which she shared photos of her snuggling up to the 34-year-old programmer and creative director. She bragged about the relationship, declaring themselves "power couple" in the caption of one snap.

Another picture was reposted from Ryder's Story as he tagged the New York City rapper on the post and added a heart emoji. Azealia additionally posted on her feed a video of her and Ryder holding hands while walking through a parking lot.