Report: Michael Keaton to Return as Batman for DCEU Films

AceShowbiz - Michael Keaton, not Ben Affleck, is going to be the main Batman of DCEU going forward, according to reports. Words are the 69-year-old actor is going to be wearing the cowl again for future films in a non-Batman-centric saga, after Affleck dropped out of the franchise in 2019.

In a recent interview with Warner Bros. chief Walter Hamada, New York Times stated that "Warner Bros. will have two different film sagas involving Batman - played by two different actors - running at the same time." One of them is starring Robert Pattinson.

When asked to confirm if he meant a new actor will play Batman in the second franchise, writer Brooks Barnes replied on Twitter that he was referring to Keaton. 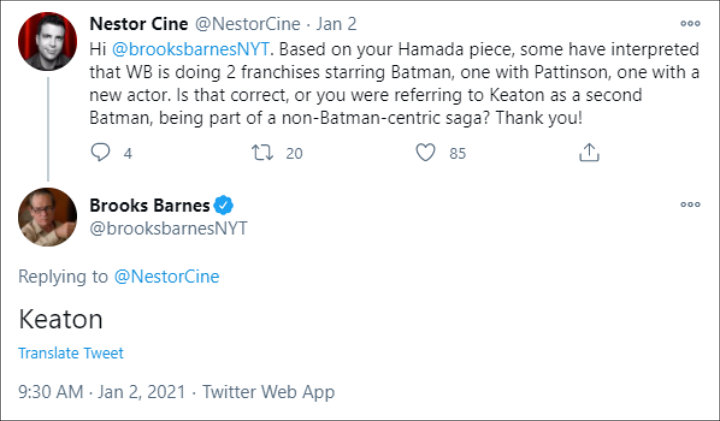 This, however, doesn't necessarily mean that Affleck is forever out of the DCEU. In the same article, Barnes reported that both the "Justice League" star as well as Keaton will be appearing in The Flash stand-alone film, which is set for release in theaters in 2022. The upcoming movie "will link the two universes and feature two Batmans, with Mr. Affleck returning as one and Michael Keaton returning as the other," so he wrote.

As reported back in July 2020, Affleck has signed a deal with Warner Bros. to re-team up with the filmmaker in the latter's future projects that are backed up by HBO Max, AT&T and WarnerMedia. It's not specified what these projects are, but it's said that they can range from cameos, miniseries and full-length feature films through HBO Max.

Affleck starred as the Caped Crusader in "Batman v Superman: Dawn of Justice" (2016) and "Justice League" (2017). He additionally made a cameo appearance as the character in "Suicide Squad" (2016). He was going to star in a standalone Batman film with him at the helm. After stepping down from the directing duty in 2017, he bid farewell to the character in January 2019, with Pattinson being tapped to take on the lead role in "The Batman", which is directed by Matt Reeves.

As for Keaton, he earned critical acclaim for his dramatic portrayal of the Gotham hero in Tim Burton's "Batman" (1989) and "Batman Returns" (1992). He has since branched out to a superhero film from rival studio Marvel, starring as the villain Vulture in 2017's "Spider-Man: Homecoming".

'The Bachelor' Premiere Recap: Matt James Meets the Ladies for the First Time in Overwhelming Night