The first African-American country superstar has lost his battle with coronavirus, and the two singers are quick to pay their respects, describing him as their major influence.

The first African-American country superstar lost his battle with COVID and stars like Dolly Parton have been quick to pay their respects.

Now, Rucker and Guyton, who both cited the singer as a major influence, have honoured him, with Darius calling Pride "one of the finest people I know".

"My heart is so heavy," Rucker writes. "Charley Pride was an icon a legend and any other word u wanna use for his greatness. He destroyed Barriers and did things that no one had ever done. But today I'm thinking of my friend. Heaven just got one of the finest people I know. I miss and love u CP!".

Guyton credits Pride with helping her find success in Nashville, Tennessee, telling Rolling Stone: "Charley Pride means the world to me. His voice and his bravery made it possible for me to be able to have a career in country music. The fact that he was a black man in country music resonated with me more than any particular song. His music moved people."

Meanwhile, bosses at the Country Music Association Awards have responded to backlash linking their indoor ceremony last month to Pride's coronavirus diagnosis - the singer performed at the prizegiving.

Shortly after his death was announced, Maren Morris took to Twitter to say that if the indoor award show contributed to his catching coronavirus, everyone should be outraged. 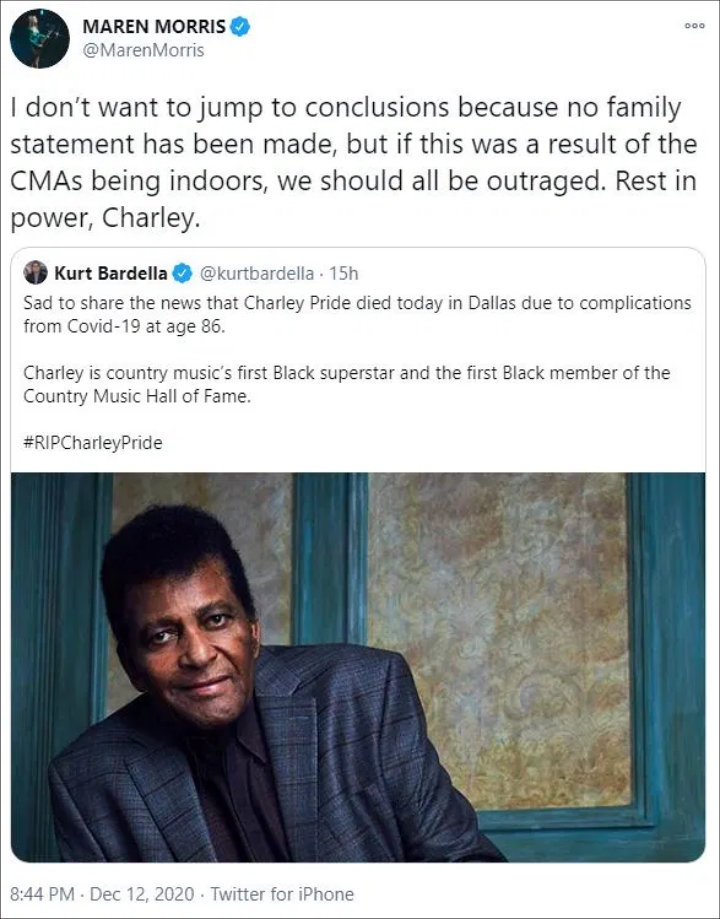 Awards show bosses have fired back with a statement, which reads: "Everyone affiliated with the CMA Awards followed strict testing protocols outlined by the city health department and unions. Charley was tested prior to traveling to Nashville. He was tested upon landing in Nashville, and again on show day, with all tests coming back negative. After returning to Texas following the CMA Awards, Charley again tested negative multiple times."

"All of us in the country music community are heartbroken by Charley's passing. Out of respect for his family during their grieving period, we will not be commenting on this further."

Darius Rucker Talks Struggles as Black Country Singer: I'm Still Trying to Get on the Radio

Report: Darius Rucker Moves on With Comedian Kate Quigley After Splitting With Wife of 20 Years