The 'Players Club' actress previously made the claims in an episode of 'Cocktails with Queens' as the panelists were questioning Hitmaka's bedroom game after he gushed about the women he slept with.

Attaching the link to an article about the matter, the "Catwoman" star tagged LisaRaye and told her to ask her boyfriend Van Hunt about how wrong her claims were. "Ms. @TheRealLRaye1, ask my my man @vanhunt he'll tell ya all y'all need ta know," she wrote on Twitter. 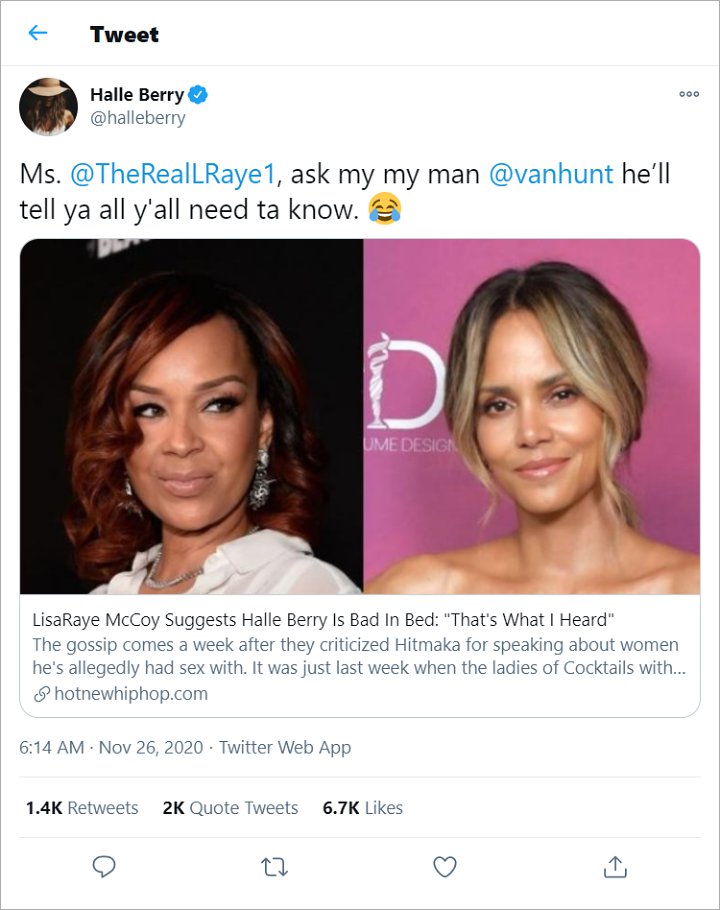 Halle Berry clapped back at LisaRaye.

Fans applauded Halle for her response. "Let them know Halle!! Lisa Raye is just mad her only known role was The Players Club; 20 years ago. She's so tacky and uncouth. That's why she never became a star," one replied to Halle's tweet. Another fan similarly responded, "No choice but to stan this response and halle."

"Good or bad, Halle knows there are men that will line up down the block, around the block and run the US like Forrest Gump just to get an audience with her...," one user said, adding, "LisaRaye out of pocket for this one."

Blasting LisaRaye, one person wrote, "I was hoping that she got misquoted or something, then I watched the clip Slightly frowning face I always wondered why we didn't see more of Lisa .. pure negative energy and bad vibes."

Prior to this, LisaRaye offered a clarifation over her comments on Halle's sexual performance. "That disturbed me because Halle is beautiful, I don't have a problem with Halle, I love Halle, Halle is breaking barriers for all of us, you know what I mean? So that is absolutely a no no," she explained in the Wednesday episode of "Cocktails with Queens".

She went on saying, "However I absolutely heard that I remember when 'Monster's Ball', her love scene, and they were trying to say that, that's how she is in bed, and it was like, 'No it's a movie guys, what are you talking about?' Then they came out with the whole Wesley Snipes thing, who was that that hit her in the ear, or something, like she didn't have good relationships, and I was like, 'Chile we all done broke up with somebody that we ain't with now.' So s**t we all tryna be with somebody, gotta go through a lot of folks to get to that one."

LisaRaye initially made the claims in an episode of "Cocktails with Queens" as the panelists were questioning Hitmaka's bedroom game after he gushed about the women he slept with in a recent "Drink Champs" episode. That prompted the ladies to discuss which celebrities who might have amazing bedroom game.

Dr. Dre Goes All Black When Returning to Studio One Day After Hospital Release