Fellow stars weigh in after Frank Whaley reveals on Twitter that the 81-year-old actor slapped him in the middle of the scene and then denied it, but there's a photographic evidence of it.

AceShowbiz - Jon Voight has been called out by his "Ray Donovan" co-star for unprovokedly slapping him on the set of the Showtime series. Frank Whaley revealed on Twitter on Monday night, August 24 that the father of Angelina Jolie slapped him "across the face in the middle of a scene" and then denied doing it, but there's a photographic evidence of it.

"F**k Jon Voight," Frank outright blasted the 81-year-old actor. "On Ray Donovan he slapped me across the face in the middle of a scene because he couldn't keep up, then denied doing it. He forgot about the still photographer who was on set." Repeating his jab at the Academy Award-winning actor, the 57-year-old added, "Bottom line: Jon Voight is a major d**k." 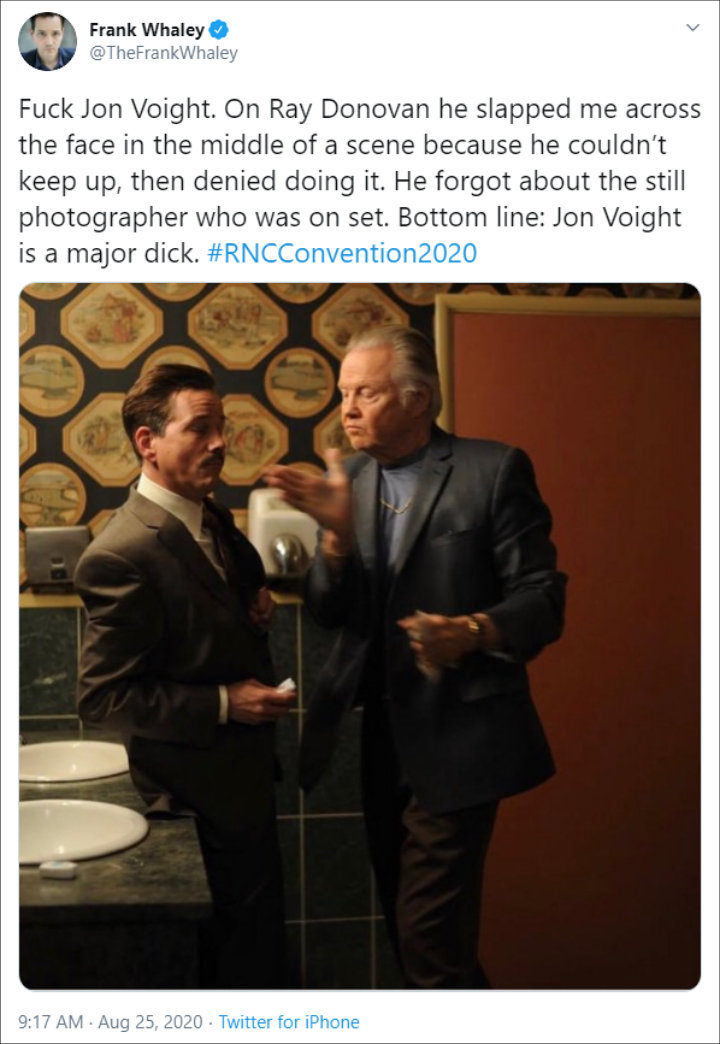 His tweet has garnered more than 70k likes and mixed reactions. Among the commenters was Republican and Donald Trump supporter Dean Cain, who seemed to try to keep his opinion neutral. "He slapped you -- that's quite clear. The reason he slapped you remains a mystery... although I have an idea," the former "Lois & Clark: The New Adventures of Superman" wrote in reply.

Actor Neil Caplan disagreed with Dean, noting, "Dean, politics aside, Voight slapped him on set, because Voight is an a**hole. Were he respectful, respectable professional, he wouldn't have laid an uninvited violent hand on another actor. PERIOD."

Amber Tamblyn seemingly has heard of the acting vet's bad reputation, writing, "Wow. Not surprising at all. Terrible behavior. Absolutely terrible." Actor-writer Saverio Guerra was clearly fuming, commenting, "You should have punched him in the face." Kathy Griffin said, "I love that you told us this. Thank you," while "Bill & Ted Face the Music" star Alex Winter weighed in, "Good lord, that’s horrible."

Jon has not responded to Frank's claims. Frank's tweet comes after Jon spoke at the Republican National Convention in support of Donald Trump.

Jon Voight Cries While Interviewing Donald Trump - Here Is Why!