'This Is Us' Is Set to 'Attack' Coronavirus in Season 5

Through his Twitter post, series creator Dan Fogelman also responds to a fan's question regarding when the NBC family drama will go back to production for the upcoming season.

AceShowbiz - "This Is Us" creator Dan Fogelman has answered one of the most frequently asked questions regarding the show's storyline. Through his Twitter post on Sunday, August 16, Fogelman revealed whether or not the NBC drama would tackle COVID-19 in its present-day storylines.

"Yes on Covid," he wrote on the blue bird app, adding, "We've decided to attack things head on. Very proud of @ThisIsUsWriters." "This Is Us" will join other TV shows, including "Grey's Anatomy", that incorporate COVID-19 into their forthcoming seasons. Coronavirus pandemic, however, didn't seem to change the planned ending as Fogelman noted that it will have the "same planned ending. Same route to get there."

As to questions regarding when the show will go back to production, Fogelman responded, "Not sure yet on production start." He's also "not sure when new eps will air." 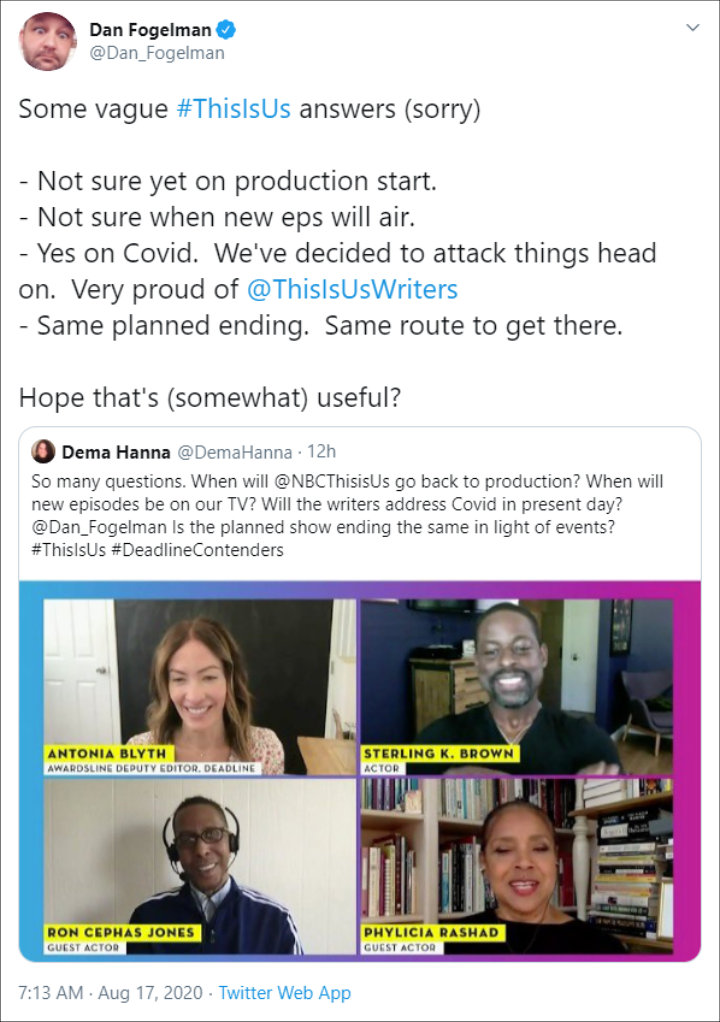 Meanwhile, star Sterling K. Brown talked on Deadline's "Contenders" about season 4 finale cliffhanger involving his character Randall Pearson and his brother Kevin (Justin Hartley). Despite having a sibling spat, the pair were seen having a special moment with their mother Rebecca (Mandy Moore) in a flashforward.

The Emmy-winning actor went on to say, "I think by the time we reach that point in the future, there are other things on their minds that they are able to focus on to put aside whatever differences they have. But for the next two or however many seasons we're around, I think you'll continue to see these brothers fray and then resolve, fray and resolve."

Phylicia Rashad, who plays Randall's mother-in-law Carol Clarke, also discussed the mysterious depths of her character. "I wanted to bring credibility to Carol," she said. "I wanted her to have a certain quality, or understatement, because she's not a person who's given to overt expressions and she's very reserved. And yet she carries so much feeling, she carries so much emotion."

"It's just that in her life, from early on, she has been reared and developed to hold that in as opposed to letting it out. So what happens inside a person when that happens? How do you live with that, and how do you channel that? And if it seeps out-and it would have to seep out-how does that feel? There's just [so many] layers [to her]," the actress, who earns an Emmy nomination for the role, added.

'RHOA': Season 14 Cast Has Been Revealed - Find Out Who Are Returning and Promoted