AceShowbiz - Alyssa Milano has protested the government's decision to give the Catholic Church a huge amount of money to help the non-profit organization amid the coronavirus crisis. Taking to her Twitter page, the actress voiced her outrage over the news that the church managed to score $1.4 billion COVID-19 aid stimulus package, while her friends who are struggling with their small businesses have not received financial aid from the government. 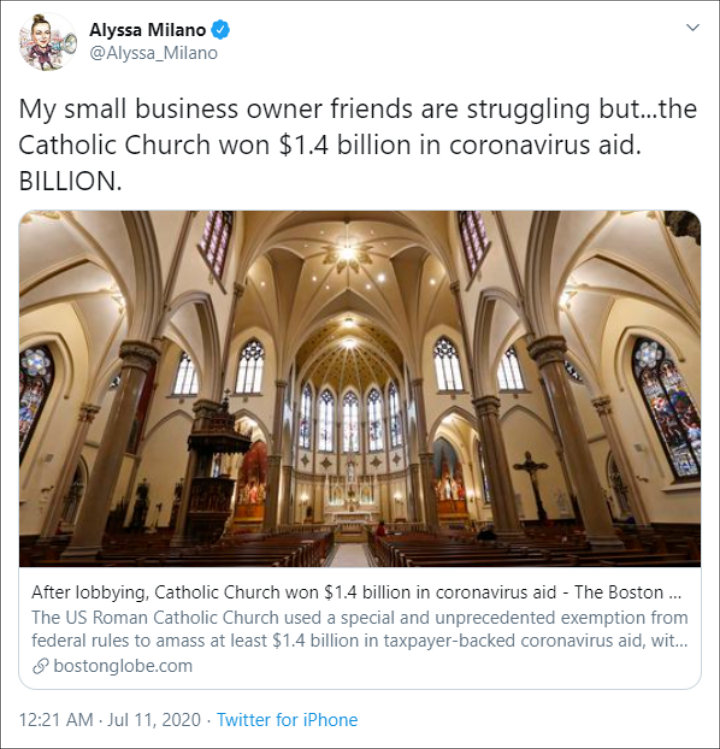 According to the article, the U.S. Roman Catholic Church used a special loophole in federal rules to amass at least $1.4 billion in taxpayer-backed coronavirus aid, though it's noted that churches, establishments of worship, and other faith-based businesses are usually not able to receive money from the U.S. Small Business Administration.

What enrages people like Alyssa, however, is part of the article which says that "many millions [is] going to dioceses that have paid huge settlements or sought bankruptcy protection because of clergy sexual abuse cover-ups."

"$200 millions went to 40 churches that pay off millions on child abuses. Our tax money is now paying off abuses," one Twitter user commented on the "Charm" alum's tweet. Another blasted Donald Trump's administration, "It's disgusting. Trumps people prioritized the loans and made sure his buddies were paid first. No money left for the people and businesses that actually needed it."

"I feel the anger in my bones! Started a small business and struggling, but hey the church needs it right....," a small business owner shared her/his rage. Another echoed the sentiment, "I'm unemployed. As a single person with no kids I pay the highest taxes. I STILL haven't got my money and these people WHO DONT PAY ANY TAXES got 1.4 BILION????"

"Small business pay taxes and get screwed. Churches pay no taxes and get billions in free money. Ridiculous," someone else wrote. "It's shameful that they even asked. I'm all for religion and faith but churches should have lost their tax exemption status a long time ago."

One person, meanwhile, tried to explain why the church needs the money. "Catholic Church like all churches employs 1000's of adm,. teachers etc..Theyre salaried positions who pay taxes on their income. Many r nonCatholic. ur misleading because of lack of Knowledge or hate. PPP program was setup to cover payroll! understand what ur tweeting about," the said user wrote.

Another involved with the work of Catholic Church added, "Hi Alyssa, big fan. Just want to point out I am one of the people benefiting from the PPP thru the Church. I work for a parish. I have 4 small kids. Other lay employees are getting covered, too. Not that this excuses the administration from denying PPP to small businesses. Still, the church has many employees who need their paychecks just as much. I just wanted to give some context. The article, in my opinion, seems written to outrage."

Alyssa was raised Roman Catholic, but she revealed in 2019 that her decisions to get two abortions in 1993 had "put her in conflict with her Catholic faith." She was defending her decisions though, adding, "... a faith I was coming to realize empowered only men to make every single decision about what was allowed and not allowed. I had a career, and a future, and potential."

Alyssa Milano Blasts Those Criticizing Her Crochet Face Mask: It Has Carbon Filter In