Rick Riordan admits to have not seen the big screen adaptations of his book series after being so turned off by the scripts when a fan expressed admiration that he dislikes the movies more than fans.

AceShowbiz - The author of the "Percy Jackson" book series is hoping his new Disney+ series will correct errors in the movie adaptations he has never seen.

Rick Riordan admits he's not a fan of the film franchise and was so turned off by the scripts he vowed never to watch the movies, starring Logan Lerman.

When a fan tweeted it's "refreshing" that the author dislikes the movies more than fans over the weekend, he responded, "Well, to you guys, it's a couple hours entertainment. To me, it's my life's work going through a meat grinder when I pleaded with them not to do it. So yeah. But it's fine. All fine. We're gonna fix it soon..." 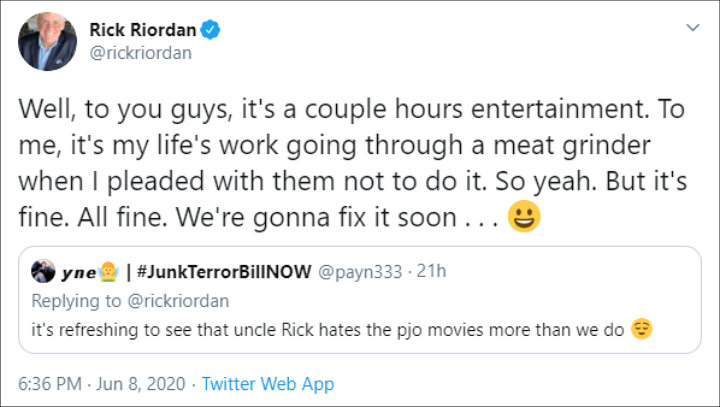 "Finally, I still have not seen the movies, and don't plan on ever doing so. I judge them from having read the scripts, because I care most about the story. I certainly have nothing against the very talented actors. Not their fault. I'm just sorry they got dragged into that mess."

Rick Riordan is not a fan of 'Percy Jackson' movies.

The author recently announced that he's working on a "Percy Jackson" TV series for Disney+ - and this time it will be a faithful adaptation of the books.

"We are very excited about the idea of a live-action series of the highest quality, following the storyline of the original 'Percy Jackson' five-book series, starting with 'The Lightning Thief' in Season 1," Riordan wrote.