Sandy Garossino has written and deleted her tweets that seemed to be directed at her daughter's boyfriend, while 'The Matrix' creator Lilly Wachowski sends expletive towards the Tesla founder.

AceShowbiz - Elon Musk might have fallen on the bad side of Grimes' mother because of his recent tweet. Hours after the Tesla founder told his over 34 million followers on Twitter to "take the red pill," former Crown prosecutor Sandy Garossino wrote a retort that seemed to have been directed at the 48-year-old.

"If your partner went through a challenging pregnancy and childbirth in the last two weeks…And you were over 16 years old," wrote the National Observer columnist in her social media account, "Would you be blaring MRA bulls**t on Twitter right now?" She has since deleted the tweet. 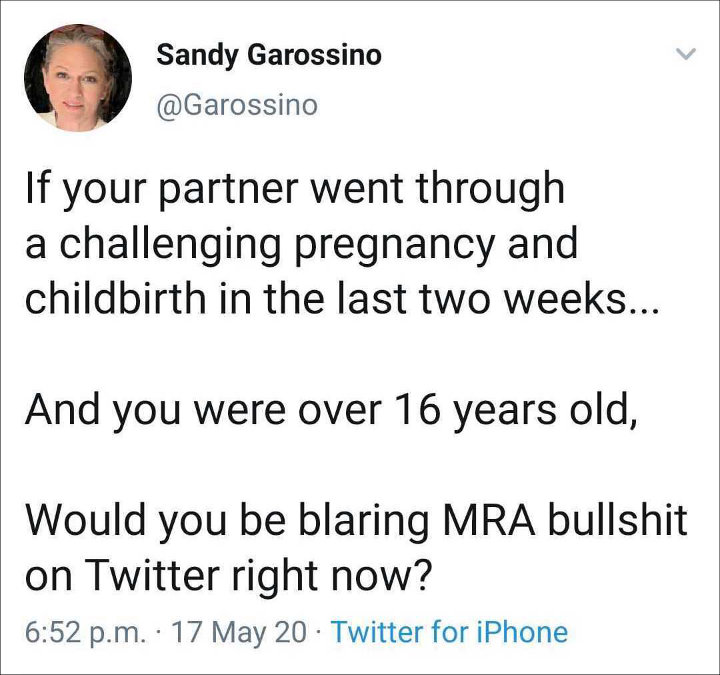 Garossino was also noticed to have responded to Canadian political consultant Gerard Butts' comment on Musk's "red pill" tweet. In response to Butts' remarks that read, "buddy has a 3 week old baby. Maybe step away from the broflakes," she wrote back, "Not yet two weeks." She has also deleted this tweet. 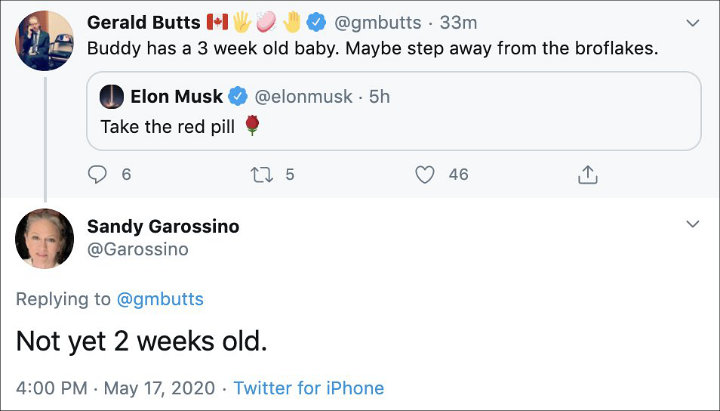 Musk came forward with the cryptic tweet on Sunday night, May 17. "The Matrix" fans would know that it was a reference to the scene from the 1999 movie wherein Morpheus informs Neo he has been living in a computer simulation.

"You take the blue pill, the story ends, you wake up in your bed and believe whatever you want to believe," Morpheus explained in the scene. "You take the red pill, you stay in Wonderland and I show you how deep the rabbit-hole goes."

However, the term "red pill" has since become popular as an indication of a free-thinking attitude. It was also used recently to be a mark of a right-wing political awakening. While Musk has declared in 2019 that he supported Democratic candidate Andrew Yang, his tweets have grown anti-regulatory since the novel coronavirus led to the shutdown of his Fremont factory.

Musk's tweet has gained support from Donald Trump's daughter, Ivanka Trump, who replied with a simple message that read, "Taken!" The interaction, however, angered "The Matrix" creator Lilly Wachowski. "F*** both of you," she wrote in response. 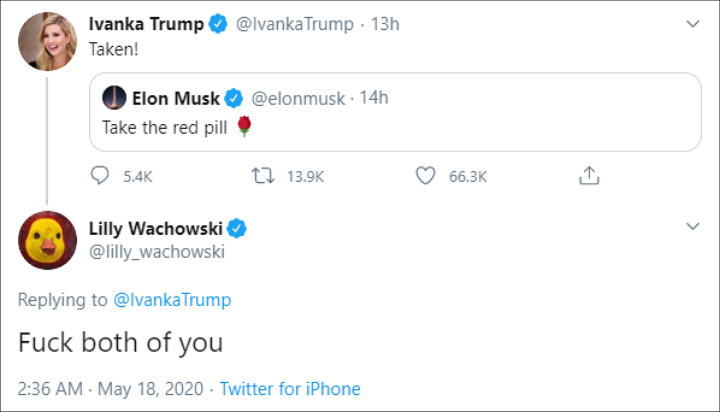 In regards to his personal life, Musk welcomed a baby boy with Grimes in early May. The Space X founder has shared a photo of him cradling his newborn, whose name was later unveiled to be X Æ A-12. In an interview on the Joe Rogan Experience podcast, he spilled their baby's unique name came from his singer girlfriend.