The 'Arkansas' actor and his model girlfriend have sparked speculations that they might have split after she was also uncovered to have no longer following him on the social media platform.

AceShowbiz - Liam Hemsworth might be single yet again. Months after going public with Gabriella Brooks, the Gale Hawthorne in "The Hunger Games" film series sparked speculations that he and his model girlfriend have called it quits as it was uncovered that he has unfollowed her on Instagram.

Upon further investigation, it was found that 23-year old Gabriella has also no longer followed the 30-year-old actor on the social media platform. While the pair have not confirm nor deny the split rumors, they have never flaunted their togetherness on the photo-sharing site. 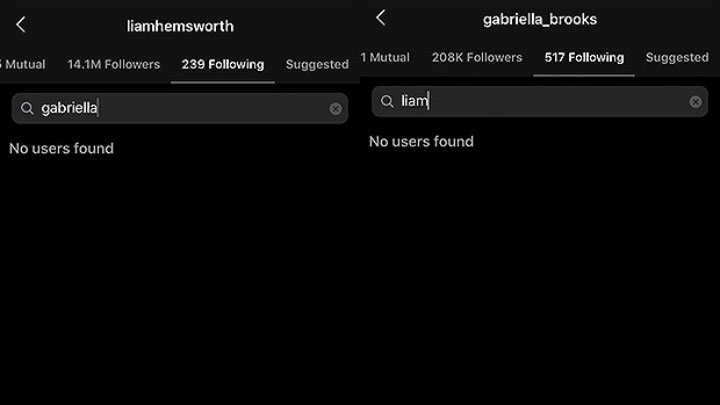 Liam and Gabriella Have No Longer Followed Each Other

Liam and Gabriella were linked romantically to each other after they were caught on camera joining his parents, Craig and Leonie Hemsworth, at a lunch spot in Byron Bay, Australia in mid-December 2019. Nearly a month later, they seemed to confirm their romance by sharing a public kiss during a beach outing.

Since then, the twosome were seen together in multiple occasions. In late January, they were spotted enjoying a casual date in Malibu, California. A little over one month later, they once again joined his parents for a lunch at Bluesfest Roadhouse in Byron Bay. While they did not flaunt any PDAs during the outing, they could be seen talking and laughing throughout the meal.

Liam himself has been self-isolating in Phillip Island, Australia as the world battles the coronavirus pandemic. In a new interview with PEOPLE, the "Arkansas" actor opened up about his life in quarantine, spilling that he has been playing Scrabble with Gabriella to spend their time.

"I used to play with my grandma when I was a kid. She loved Scrabble. It made me nostalgic and brought back memories," the ex-husband of Miley Cyrus explained, before noting that the board game made him realize that he is "terrible at spelling." He went on to confess, "I was cheating and Googling words."

On his choice location for quarantining, Liam shared what made him grateful to stay there. "You're still allowed to surf here. I paddled out the other day and it was just a really beautiful day and the surf was good and I was on my own," he spilled. "I'm just grateful to spend time here right now."