Catherine Brelet, the wife of the 'Seventh Seal' star, confirms that the two-time Oscar-nominated actor has passed away on Sunday, March 8 at the age of 90.

AceShowbiz - Mia Farrow and Seth Meyers are among the stars who have paid tribute to the actor Max von Sydow, who has died aged 90.

"The Seventh Seal" star passed away on Sunday (March 08), his wife Catherine Brelet announced on Monday.

After news of his death broke, a host of famous names paid tribute to Max for his storied career, during which he starred in iconic films including "The Exorcist", "The Greatest Story Ever Told", "Flash Gordon", and "Star Wars: The Force Awakens", in addition to his work with "The Seventh Seal" director Ingmar Bergman.

Meyers replied to a photo posted by New York Times' culture reporter David Itzkoff of him playing Brewmeister Smith in the 1983 comedy "Strange Brew" by writing: "This was the first Max Von Sydow film I ever saw. Being a kid, I just assumed he was a famous Canadian comedian. Turns out he was a lot more!" 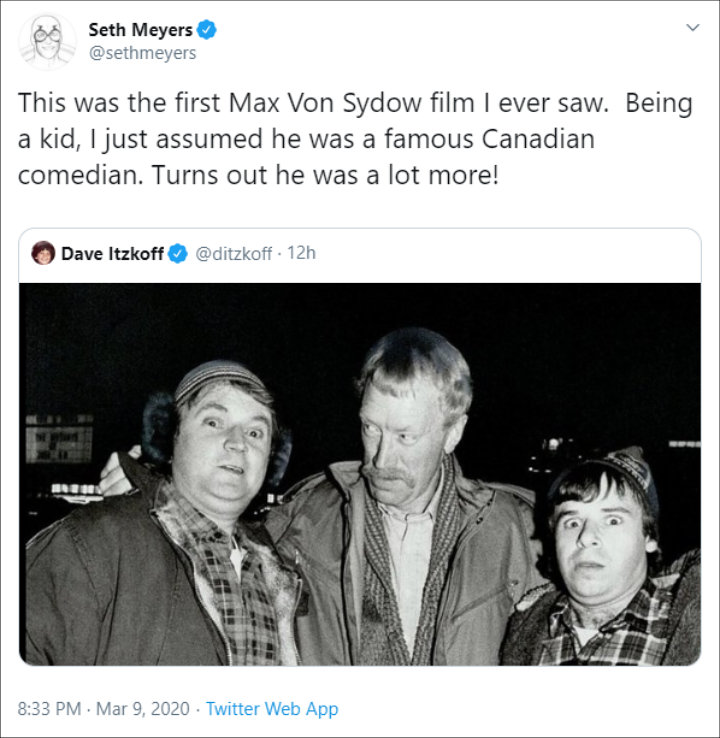 "Max Von Sydow (sic), such an iconic presence in cinema for seven decades, it seemed like he'd always be with us," Wright gushed. "He changed the face of international film with Bergman, played Christ, fought the devil, pressed the HOT HAIL button & was Oscar nominated for a silent performance. A god."

Smith referenced his famous chess match against the figure of death in "The Seventh Seal", and added: "Farewell, Max von Sydow. You were in many much more respected movies than Strange Brew and Flash Gordon but I loved you for those flicks first." 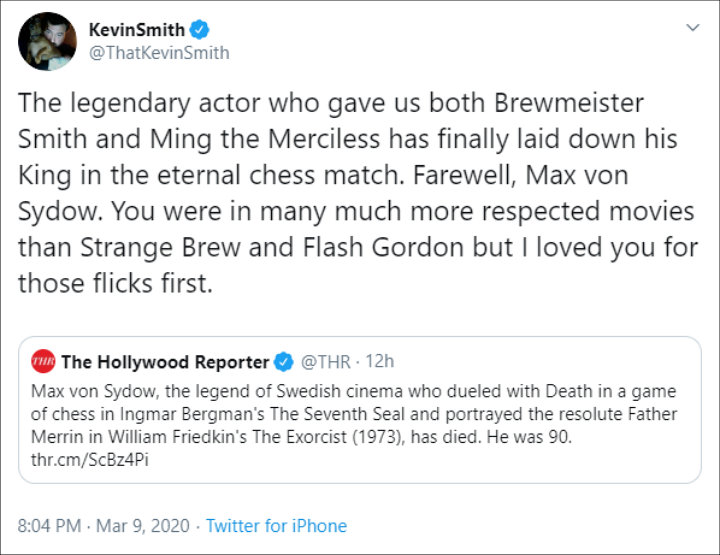 Von Sydow, who received two Oscar nominations during his career, worked until late in life, appearing in "Game of Thrones" in 2016, 2011's "Extremely Loud & Incredibly Close", for which he received a Best Supporting Actor Academy Award nomination, as well as 2015's "Star Wars: The Force Awakens".

The actor gave up his Swedish citizenship to become a French national in 2002 and was awarded the Chevalier de la Legion d'honneur in 2012.

In addition to his wife, he is survived by the two sons he shared with his first wife Christina Inga Britta Olin, who died in 1998.