Additionally, Carrie Underwood bets 'everybody was crying' on that scary night and Kacey Musgraves pledges to 'help in any way' she can after the disaster hit the state.

AceShowbiz - Taylor Swift and Miley Cyrus are among those left heartbroken by destructive Nashville tornadoes. After the twisters tore through Middle Tennessee and left at least 25 people dead in early Tuesday morning, February 3, the "Lover" singer, the "Wrecking Ball" hitmaker and many other celebrities are sending their love and support to those affected.

Swift, who started her country music career in Nashville when she was 14 years old, turned to her social media accounts to express her sympathy. "My heart is with everyone in Tennessee who has been affected by the tornados," she wrote in both her Instagram Story and Twitter feed. "Sending you my love and prayers." 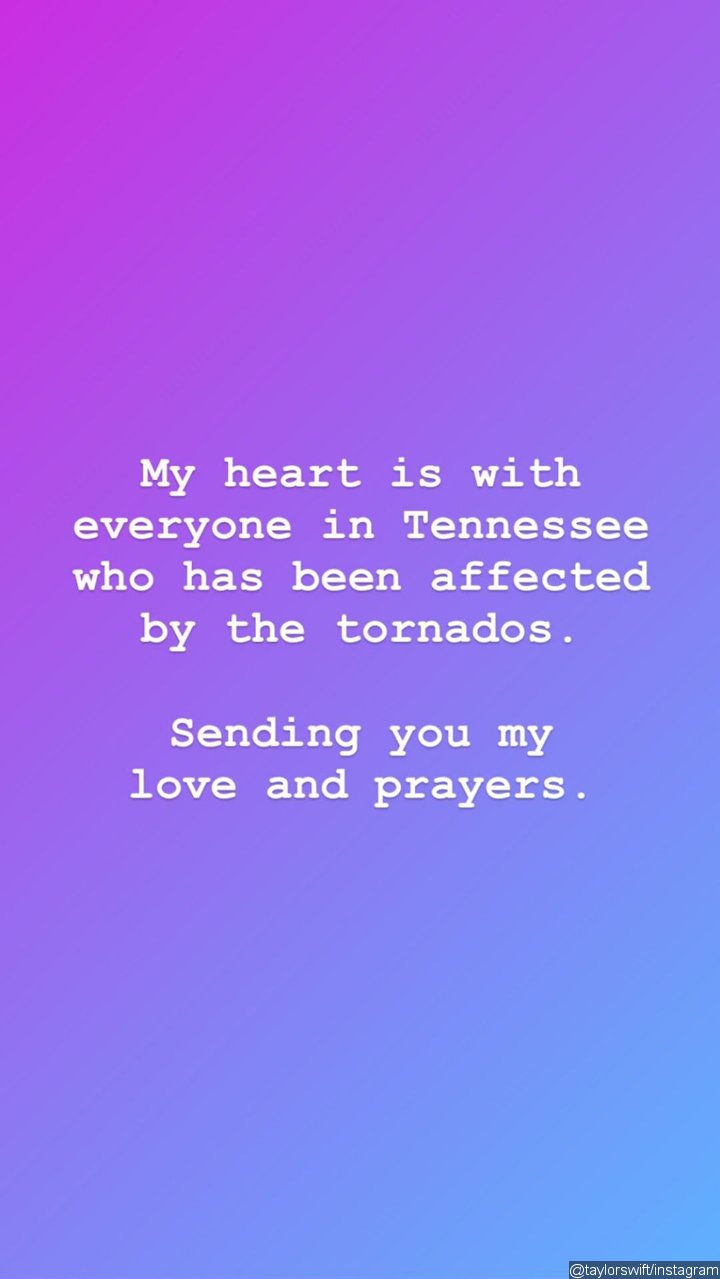 Cyrus, whose father is country singer Billy Ray Cyrus on the other hand, put out a monochrome photo of her family. Along with it, she assured fans that her loved ones back home are safe as she noted, "Thinking about my home and family in Nashville and how fortunate I am that my place and loved ones have remained safe in these deadly tornados."

"My heart is broken for my home state. So much loss and damage," the ex-wife Liam Hemsworth continued. "We are #NashvilleStrong and will rebuild together! Follow @happyhippiefdn for updates on shelter and ways to get active! I am receiving information just as fast as everyone else at this point so stay tuned and we will share info as quickly as possible!"

Country star Carrie Underwood, meanwhile, offered updates on her husband Mike Fisher and two sons, 5-year-old Isaiah and 13-month-old Jacob. During an appearance on "Today", she spilled that Mike "had to go upstairs at like 2 A.M. and grab the boys and take them down to a little safe room in our house. I was like, 'I bet everybody is crying.' It's 2 A.M., freaking out, so it was scary."

Fellow country singer Kacey Musgraves also confirmed that she and her family weren't really affected by the tornadoes. "Me and my fam are safe but many friends aren't so lucky," she tweeted. "We did live right in one of the worst hit spots a matter of months ago. It's so crazy. I'm so nervous to find out who the fatalities are. Nashville is so tight knit." She went on to pledge "help in any way I can." 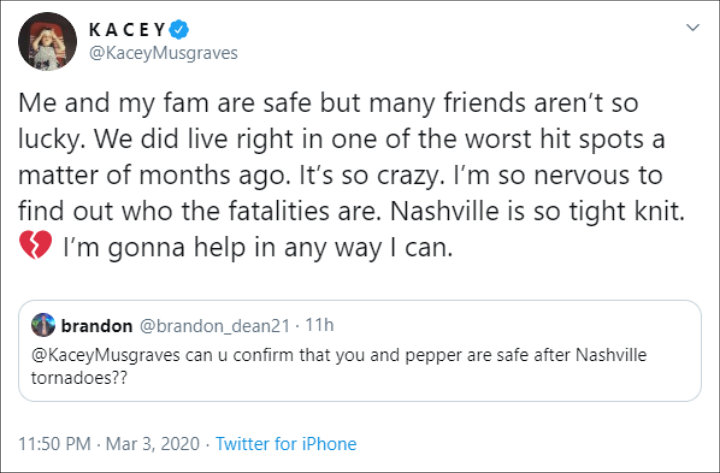 Kacey Musgraves confirmed she and her family were okay.

Another country star Dierks Bentley revealed that his drummer was among those losing their houses due to the tornadoes. "Lot of people lost their homes, including our drummer, and a lot of people in need. But no one comes together as a city like #nashville does," his Instagram post read.

As for his own experience, the "Burning Man" crooner spilled, "@astephens1110 and I ducked around this crazy cell and landed at john tune airport around 11:30 last night, coming back from LA. Glad we landed when we did. Wouldn’t have been so good an hour later. It was the cell that turned into the tornado."

Additionally, country legend Dolly Parton sent out her own message to the victims. "Praying for all those affected by the devastating storms in Tennessee and my heart is especially with the families who lost loved ones," she posted on Instagram. "We are all with you."