After posting a 'Rich Wives Club of Atlanta' picture, Tiny Cottle hits back at one of her Instagram followers who makes remarks about her husband's alleged infidelity.

AceShowbiz - Tameka "Tiny" Cottle lost her patience with one of her followers on Instagram. She posted a group picture with Tammy Rivera, Toya Johnson, Monica, and Kandi Burruss. And someone gave a not-so-favorable comment, "Y'all got cheated on."

The remarks apparently touched Tiny's nerves as the Xscape star who is married to T.I. quickly fired back, "U did too boo..& we still out here shining with or without a man!! & u??? Your man probably come home when he choose too..tlkn bout us. [smirking face]."

She didn't deny her husband's cheating. Instead, she seemingly suggested it's better to have a man, even though he's cheating, than to be seen as a lonely woman. She added, "Frm the looks of your page u look like a lonely b***h. Must be bad cause we still got men that loves us & well u???" 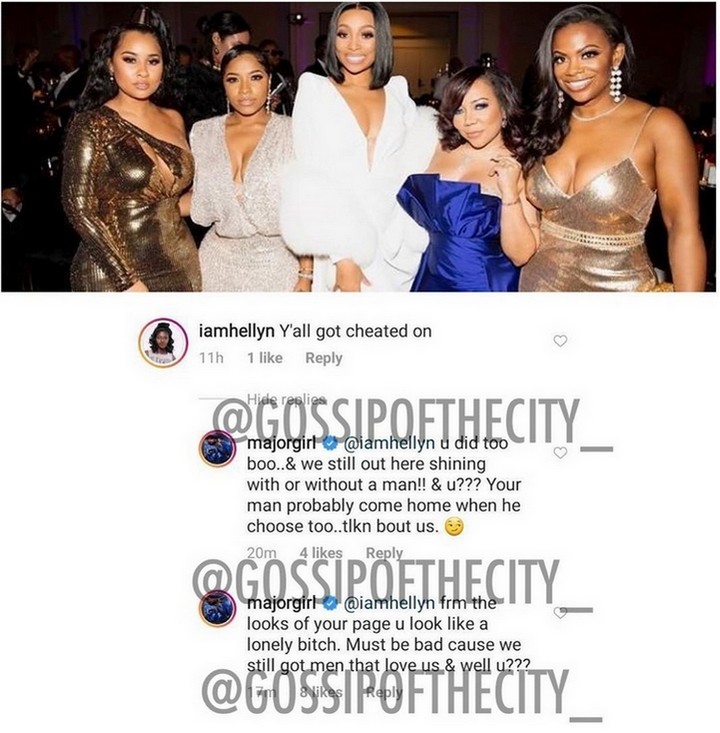 Meanwhile, in her caption, she called herself along with her female pals in the picture "Rich Wives Club of Atlanta." She explained, "Either we are one or have been one!! We all got a hell of a story that's relatable to every real woman!!"

Tiny has been married to T.I. since 2010. They have three children together. During their relationship, T.I. was plagued with infidelity allegations. His alleged side chicks included Bernice Burgos and Jasmin Jaye. In 2016, she even filed for divorce but the couple reconciled the following year.

The couple went through a rough patch again in 2018 after a video went viral showing him with his squeeze. "The video ain't really the issue," he said back then. "The video being posted up on social media is the issue. If someone had sent her that video privately, she and I would've had one conversation about it, and it would've been over."

In November 2019 during a sit-down with Jada Pinkett Smith, Tiny claimed T.I. cheated on her because the rapper was not fond of her "voice that was not so timid" and wanted a woman who would listen to his orders.