It's understandable because 2019 has been undoubtedly tumultuous for her. after her split from baby daddy Tristan Thompson, who reportedly kissing family friend Jordyn Woods at a party.

AceShowbiz - Khloe Kardashian has shared her resolution for 2020. The "Keeping Up with the Kardashians" star took to Instagram Stories on December 26 that all she wanted in the new year was drama-free life.

The 35-year-old shared an inspiring quote from the social media account Her Incredible Mindset. The message read, "For 2020, I simply want my family to be healthy and happy, my mind at peace, my friends always safe and a life free of drama." 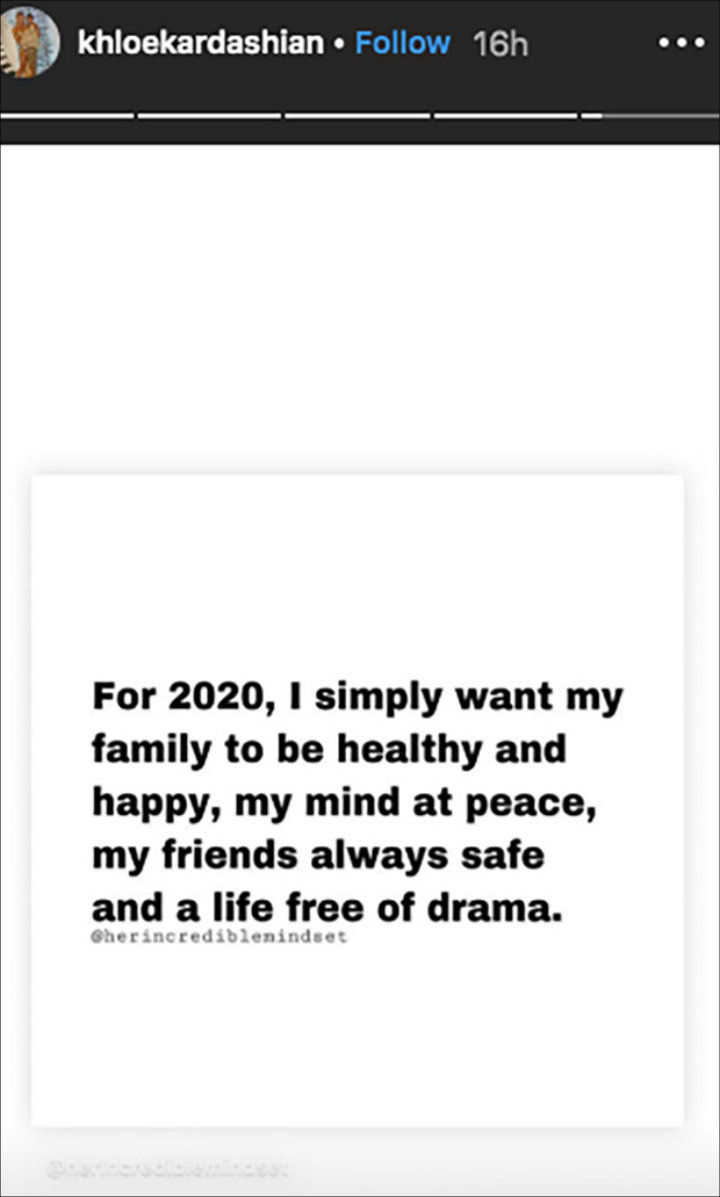 Khloe Kardashian shared her resolution for 2020

Khloe has all right to wish for one because 2019 has been undoubtedly tumultuous for her. Back in March, she split from baby daddy Tristan Thompson after he was reported to be kissing family friend Jordyn Woods at a party in February. The drama dragged for quite some time with her and the former BFF of Kylie Jenner appeared to shade each other on social media.

Khloe seemingly tried to put all the drama in the past by writing on Instagram that she had forgiven Jordyn over the cheating drama involving the two and Tristan. "I don't hold any negative feelings towards ANYONE! I mean that. Life is short! We are all human trying to figure out this thing called life. Who am I to condemn anyone else?" she said on the photo-sharing platform. She also said that she chose to move on because holding "onto hate is only going to hurt me in the end," adding that she wanted "nothing but beautfiful blessings for EVERYBODY that has ever been in my life."

However, she appeared to backtrack her apology less than a day after the result of the social media star's lie detector test was revealed. In one post, Khloe noted that "liars are always ready to take oaths," before sharing in a separate post a quote that read, "Stop being so f***ing forgiving, people know what exactly what the f**k they're doing."

Meanwhile, Khloe was rumored to be secretly getting back together with Tristan, who has been openly flirting with her on Instagram. "Khloe and Tristan are 100 percent back together," a source said. "It's a secret because she knows how much everyone would judge her. But she loves him despite how sh***y he treated her."

From Brad Pitt to Ryan Phillippe, Here Are Celebrities Caught in Cheating Rumors With Co-Stars

Orlando Brown Beaten Up and Kicked Out of House

Mya Finally Reveals Whom She's Married to in Wedding Video