Reacting to the criticism launched by the Chancellor, the 'Paddington' actor takes to Twitter to share the exact words he told the British politician at the premiere of 'The Irishman'.

AceShowbiz - Hugh Grant has hit back after being criticised by British politician, Chancellor Sajid Javid, for refusing to shake his hand at the premiere for Martin Scorsese's "The Irishman" earlier this month.

Javid claimed in an interview with Britain's ES Magazine he put his hand out to the "Notting Hill" star and said "lovely to meet you," but Grant refused to shake it.

He told the publication, "I think that is incredibly rude."

"I wonder if people like Hugh Grant think they are part of the elite and they look down on working class people no matter what station they reach in life," Javid added.

However, a spokesperson for the "Love Actually" star told the Press Association Grant declined the handshake because he felt Javid was dismissive to victims of phone-hacking by the press.

Grant later shared the comments made by his representative on Twitter, claiming his exact words were, "If you don't mind, I won't shake your hand because you were rude and dismissive to the victims of press abuse when you met them as culture secretary."

"Hugh would like to point out that the victims in question were not celebrities," the spokesman clarified. "They were people with personal family tragedies who had been abused by sections of the press." 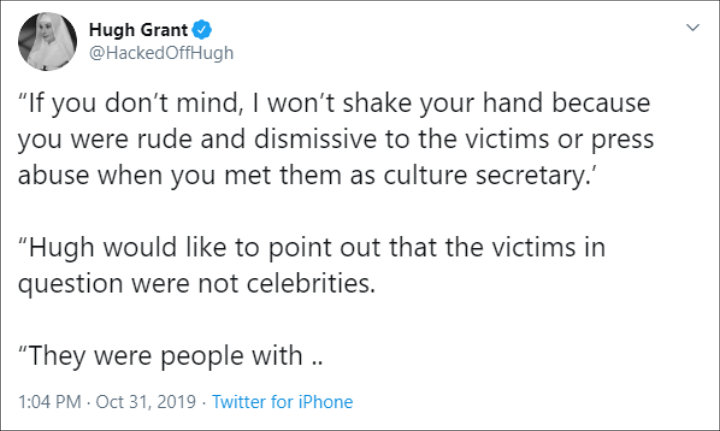 The actor received a six-figure payout against Mirror Group Newspapers last year, after his personal phone was hacked by reporters from its publications between 1998 and 2009. He's since been an avid supporter of the Hacked Off campaign against the practice.