Shamari DeVoe Claims She 'Chose' Not to Return 'RHOA'

However, some fans on Twitter are seemingly not comvinced enough as one says, 'Said every fired HW....,' while another one demands the singer to provide 'the receipts.'

AceShowbiz - Shamari DeVoe sets the record straight about rumors of her being fired from "The Real Housewives of Atlanta" after her absence in the recently-released trailer for season 12. The singer took to her Twitter account to finally respond to a fan's question about whether or not she was let go from the popular show.

"Why did you get fired?" the curious fan asked on the blue bird app. Replying to the inquiry, Shamari explained, "I was not 'fired', sweet face." She went on explaining, "I chose not to return due to personal reasons," before concluding her tweet with a quote that read, "The sun sets and rises when it's ready.....

However, some fans didn't seem to buy her words. "Said every fired HW....," an unconvinced fan said in the replies. "Lol they chose to not offer you a contract," another fan added. 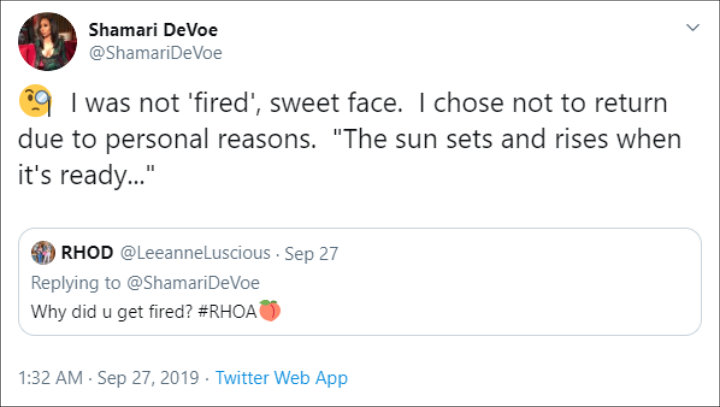 Meanwhile, a person simply asked Shamari to show "the receipts," with someone guessed the possible scenario during the negotiations. "U were asked back as a friend and u declined," said the user. Another fan then took a jab at the TV star, writing, "She didnt have a story line except that thing she kept on pushing about having an open marriege. Besides that she had nothing to offer..

Although Shamari didn't return for forthcoming season 12, it seems like there is no bad blood between her and her former co-stars. She showed support for them by sharing a promo photo of the cast members in the new season including Porsha Williams, NeNe Leakes, Cynthia Bailey, Kandi Burruss, Eva Marcille and Kenya Moore. "Puuuuuuuuuuussssssh all the way through!" Shamari captioned the picture.

The trailer of upcoming season featured an intense fight between rivals NeNe and Kenya. Additionally, Kenya was seen being so mad for some reason as she yelled at the ladies, "Somebody in this room is the f***ing snake!" Porsha's drama with fiance Dennis McKinley was also glimpsed in the video. Seemingly referring to his infidelity scandal that led to his brief split from Porsha, Dennis could be heard saying, "I made a mistake. I'm like, I'mma work it out, but some stuff is not forgivable..

'RHOA': Kenya Moore Livid After NeNe Leakes Tells Her to 'Shut Up' After Learning Who's the 'Snake'