Organizers of the Croatia's hip-hop festival reveal on Twitter that they have to evacuate revelers from the event's site under the advice of police and emergency services due to heavy winds.

AceShowbiz - Tyga was forced to cancel his gig at Croatia's Fresh Island Festival after forest fires threatened the event's site.

The three-day hip-hop festival got underway at venues in Zrce Beach, on the Croatian island of Pag, on Monday (July 15), but came to a frightening halt that night when revellers were evacuated from the site after wildfires burned dangerously close by.

A statement posted by organisers on Twitter thanked those attending for their understanding and reassured family and friends they were all safe.

"There was a forest fire near to Zrce Beach last night," the first of several tweets read. "After being advised by the police and emergency services to evacuate due to heavy winds, we guided festival goers to the parking area near Noa Club which was a safe distance from the fire."

"We would like to say a big thank you to all Fresh Islanders who were at the festival for being so patient and supportive of each other and for cooperating with security and emergency services during the fire to stay safe."

With emergency services still attempting to contain the fire, they are unable to confirm if Tuesday night's performances would go ahead.

Tyga is yet to comment on the fires, but British rapper Not3s wrote on Twitter that he had been held backstage and prevented from performing. 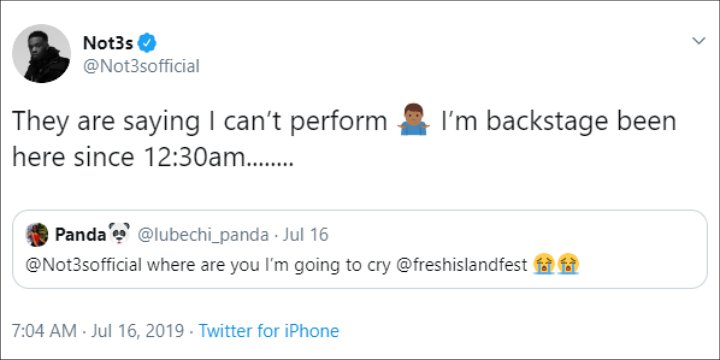 Stefflon Don and Yxng Bane are scheduled to perform before the festival comes to an end on Wednesday.

Tyga Thanks Abu Dhabi Doctors for Treatment During Hospitalization