Days after he responded angrily to a reporter during a press conference at 2019 Cannes Film Festival, the acclaimed director stresses that his new black comedy is not about tragic actress Sharon Tate.

AceShowbiz - Quentin Tarantino has defended his decision to only feature Margot Robbie sparingly in his new movie "Once Upon a Time in Hollywood".

The director has been receiving high praise for his new black comedy, which is set in the late 1960s and revolves around washed-up western star Rick Dalton, played by Leonardo DiCaprio, who lives next door to tragic actress Sharon Tate - one of the victims murdered by members of Charles Manson's cult The Family.

Robbie portrays Tate in the movie, which also stars Brad Pitt as Dalton's best friend and longtime stunt double Cliff Booth, but during a press conference at the Cannes Film Festival in France on Wednesday, May 22, one journalist took issue with the number of lines the Australian actress delivers onscreen, prompting Tarantino to fire back, "I reject your hypothesis!".

Robbie tried to smooth over the tense exchange, saying, "I think the moments I was on screen gave a moment to honour Sharon."

"I think the tragedy was the loss of innocence. To show the wonderful sides of her could be done without speaking. I did feel like I got a lot of time to explore the character without dialogue, which is an interesting thing."

Tarantino has now shed a little light on his angry response in an interview with IndieWire, explaining Robbie's role is purposefully small, because the film isn't about Tate.

Tarantino's outburst at the press conference has since won him the support of "Natural Born Killers" star Juliette Lewis, who took to Twitter on Thursday to weigh in on the drama. 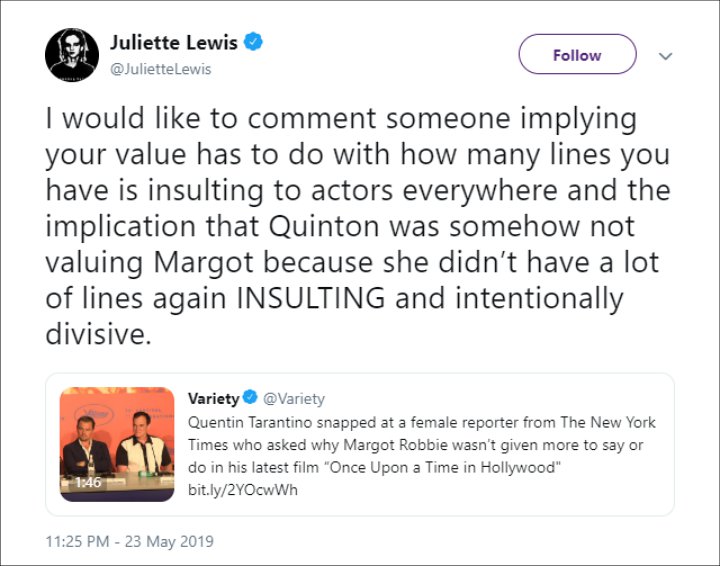 Juliette Lewis weighed in on the drama surrounding Margot Robbie's role in 'Once Upon a Time in Hollywood'.

"Someone implying your value has to do with how many lines you have is insulting to actors everywhere," she wrote, "and the implication that Quinton (sic) was somehow not valuing Margot because she didn't have a lot of lines again INSULTING and intentionally divisive (sic)."